Has Big Brother's Lewis F just crossed the line with his "vile" rant at Isabella and Akeem?

Big Brother viewers are questioning whether a line was crossed in Thursday’s show, when a row between Lewis F and Akeem seemed dangerously close to getting physical.

The explosive situation started innocently enough in a reprise of the classic Big Brother shock-suit task, where Akeem and Lewis were teamed with Cameron as Thinkers for the house. Unfortunately, they didn’t do well and spent much of the day sniping at each other with petty insults.

The tension between Thinkers Lewis F, Cameron and Akeem throughout the task later boiled into a row in the hot tub, where Akeem accused Lewis F of trashing new housemate Hussain behind his back. 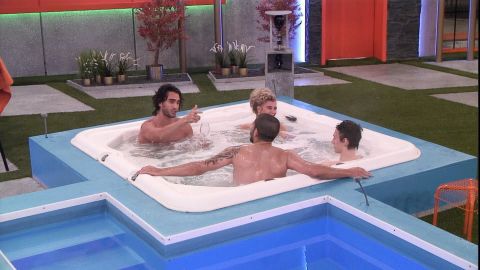 “Always thinking the world’s against you,” Akeem complained, with Lewis sniping: “Not the world! Just you, slagging me off behind my back!”

Lewis then got unexpectedly heated while brandishing a wine glass, shouting: “Shut up Akeem, you boring c**t! Shut the f**k up!”

Suddenly the two were literally going head-to-head arguing, and when Isabella tried to play peacemaker, Lewis shouted her down to stay out of it and ended up rightfully angering her as well.

“You’re not the queen or something are you?” Lewis F sneered to her.

As the night wore on, Lewis F tried to make peace with Isabella, but ended up messing up his mea culpa when he again complained that she should have stayed out of his argument.

Meanwhile, Cameron had a go at Cian because the Irish farmer tried to get Akeem out of the hot tub in the heat of the argument, accusing him of intervening for more camera time.

Moments later, Lewis was in the Diary Room slating Cian too, accusing him of having “forced his feelings on Cameron” just before the teenager came out last week.

As a result of all of this, many viewers felt that Lewis and Cameron crossed a line, especially in the way Lewis spoke to Isabella:

Even on Bit on the Side later in the evening, Rylan Clark-Neal danced around calling Lewis’s treatment of Isabella “uncomfortable”. Lewis is probably lucky he saved himself from eviction with this week’s Gamechanger, otherwise he’d likely be going home in Friday night’s eviction judging by the initial reactions.

Big Brother continues on Friday at 10pm on Channel 5.