As you’ve probably heard by now, England triumphed 2-0 over Sweden in yesterday’s (July 7) World Cup quarter-final, which means that all of that excitement and all of those nerves football fans have been experiencing since the Colombia game aren’t going anywhere just yet.

Instead, we get to do it all over again on Wednesday, July 11 when England play Croatia, who won their quarter-final game against Russia last night, in the World Cup semi-final – and now we know exactly where you’ll be able to watch England’s next big game.

England vs Croatia will air live on ITV, with coverage starting at 6pm ahead of the 7pm kick-off.

BBC One will air the World Cup’s first semi-final match the day before (Tuesday, July 10) when France will play Belgium for the chance to play in the 2018 World Cup final.

England’s win in yesterday’s game had everyone celebrating, from EastEnders‘ Ross Kemp – who is becoming a bit of an internet sensation thanks to his online reactions to each game – to Rylan Clark-Neal and even Reese Witherspoon. 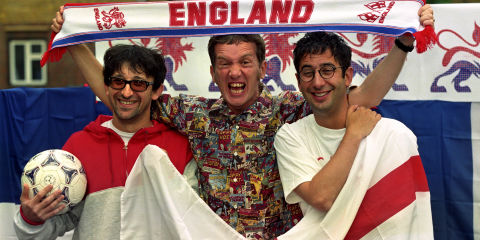 Not everyone across the nation was involved in the celebrations, however, as those watching on BBC iPlayer missed the end of the game when iPlayer crashed across all platforms and left many, many fans feeling understandably disgruntled.

In a statement to Digital Spy, the BBC said: “We’re aware that some people were experiencing technical issues and are looking into the cause. We apologise to anyone who was affected.”