Hollyoaks teen Ollie Morgan could fall back into Buster Smith’s trap when he returns to the football team next week.

Ollie (Aedan Duckworth) was left in shock last month when his evil coach Buster tried to make a move on him behind closed doors.

As his family remain in the dark over what’s really going on, upcoming scenes will see Ollie head back to the club – and straight back into Buster’s clutches.

When the team return from their trip to Barcelona, Ollie grows increasingly irritated that Buster is continuing to unfairly punish him with chores. 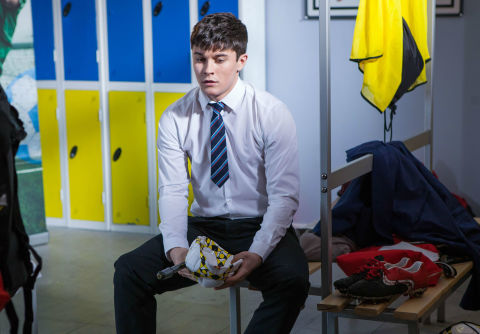 Aware of Ollie’s frustration, Buster decides to give him another chance and pits him against his friend Imran Maalik in a match.

As the two boys compete for the final place in the team, Ollie ends up playing a hard tackle and knocks Imran to the ground in the process.

With Imran no longer able to play, Ollie is soon back in the team – but does this mean that he’s back in Buster’s clutches as well?

Survivors Manchester is available to support boys and men who have been affected by sexual abuse and rape. Its website can be found at www.survivorsmanchester.org.uk and its helpline is 0161 236 2182. Local support agencies for all male and female survivors can be found at www.thesurvivorstrust.org. In an emergency, please dial 999.

Digital Spy Soap Scoop video – hit play below for all the latest Hollyoaks spoilers, as James’s backstory is revealed and Ollie continues to struggle.