Hollyoaks fans will see Farrah Maalik face terrible danger next week after she helps Ryan Knight to escape from prison.

Farrah finds herself embroiled in the final chapter of Ryan’s storyline after he makes her a shocking offer – he’ll finally tell her where Kim Butterfield is if she helps him get free.

Once Ryan is back at large, he takes Farrah on a wild goose chase by leading her into a deserted forest – nowhere near the school where Kim is trapped. Could he be lining up Farrah as his final victim?

Digital Spy recently caught up with Krupa Pattani, who plays Farrah, to hear about the life-or-death situation for her character.

How did you feel about being part of the big climax to Ryan’s storyline?

“I got so excited about it. When I first heard about it, I heard that I might be breaking Ryan out of prison. I was over the moon, because I love action scenes like that. I also loved the interplay that might happen between Farrah being a psychologist and Ryan being in prison. It’s all-new territory, so I was really excited.”

What goes through Farrah’s mind when she’s asking Ryan for answers about Kim and she seems to be getting nowhere?

“I think Farrah is really desperate, but she’s trying to appear like she’s in control. She thinks she knows how to get what she wants from Ryan, but actually he has all the power, because he could potentially never tell her where Kim is.”

How shocked is Farrah when Ryan bargains with her to secure his escape?

“Farrah is shocked, but she’s probably more shocked at her own reaction. Everything has gone so crazy at that point. Farrah is so desperate that her attitude is: ‘I literally will do anything.’ So Farrah is maybe surprised at her own morality, in the sense that she’d be willing to cross that line to get her girlfriend back.” 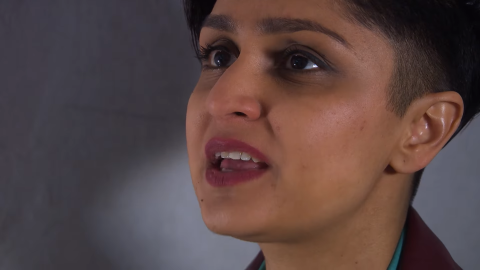 Farrah chooses to confide in Grace Black about her dilemma. Can you tell us about that?

“In this situation, Grace is the one helping Farrah when she’s lost. I think that’s where the connection comes from. For Farrah to meet someone who’s so strong for her in this moment of such desperation, it’s really interesting to see. It’s a really lovely friendship that they’re striking up.”

How does Farrah think Grace will help?

“Farrah does think that she’s going to go through with it and she’s going to break Ryan out of jail. But I think because she’s slightly out of her depth, she goes to Grace to ask for help.

“Farrah knows that she can probably get what she needs from Grace, which is a passport and all these things that she’s going to get to break Ryan out of jail. But you’ll have to wait and see how Grace reacts…”

We know that Ryan does get out and he ends up taking Farrah to a deserted forest. How does Farrah react?

“I think Farrah is massively nervous. She knows that she doesn’t have the skills to fight Ryan off. If he decided to kill her, he could probably kill her quite quickly. I think that becomes really apparent when you’re walking alone with someone. Ryan has all the power at that point, because he’s the one leading her into the woods.

“I think Farrah is scared for her own life at that point. I think she really goes to some dark places in order to be able to get out of that situation.” 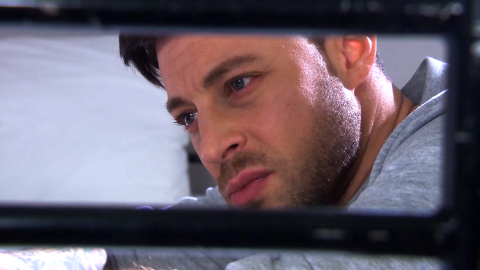 Hollyoaks has confirmed another death as part of Ryan’s story. Do you think fans will be scared for Farrah?

“I think so! I’ve been following the speculation a little bit on social media and it’s really interesting to see. When you know the storyline, you don’t think about all of the different possibilities. But there have been people going: ‘Oh my God, does that mean it’s Farrah?'”

Would you like to see a happy ending for Farrah and Kim?

“I would, but you’ll have to wait and see whether there can be a happy ending when there’s so much going wrong. It’d be nice if they can get a bit of a happy ending, but who knows?”

Has it been strange this year to suddenly stop working with Daisy Wood-Davis (Kim) so much? She’s spent all her time in the abandoned school…

“Well, actually, it’s been part and parcel of the whole flow of doing a soap. Originally I was doing a lot of my stuff with Daisy and that was great. But it’s also been great to do different stuff, because it means different avenues for the character and different paths for Farrah as a person.

“It was nice to have the relationship and the love between them. But now we’ve also had a chance just to explore Farrah better as a person – her morality, her sense of self and how she reacts as a professional when her back’s up against a wall. That’s been really interesting to explore. So rather than being strange, it’s just been a really golden opportunity.” 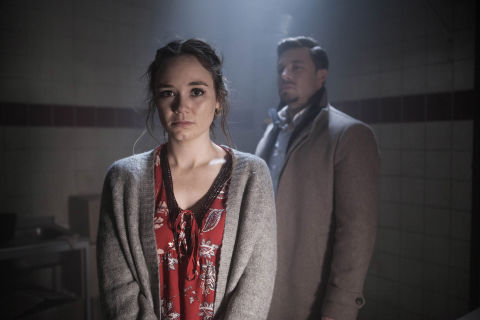 “I think that’s been handled really well. Ijaz and Harvey, who play Imran and Misbah, are really well-informed about it. It’s been fully researched as a storyline, as we know that people may be affected watching it.

“It’s interesting, because Misbah is a consultant in the hospital and she does very well. She’s supporting her family, and yet her youngest child can do that to her and she doesn’t know what to do.”

How would Farrah feel if she knew what was going on?

“I think Farrah would be fuming. I think she would, in the end, want to help her brother. He needs help, mentally and emotionally, to stop this behaviour. But I think she’d be so angry with her brother for doing that, even though she knows that he probably just needs help because he’s processing something really dark.

“I think there’s a professional part of Farrah that would take a step back eventually. But to begin with, I think she’d be highly emotional about it.”

Is there a chance this could tear the Maalik family apart?

“I think they’re always strong enough to come though things in the end. This could probably push them just past breaking point, but I think they’ll break and then they’ll just come back together again.

“That’s what I love about the Maaliks. Things happen where you’d think they’d never speak to each other again, like the fact that they’ve been hiding their father’s suicide from the youngest siblings over the years. But they always come together and it’s really simple. Like last time, it was a game of Trivial Pursuit. All of this stuff had happened, but they could still sit down together and play a game, or have dinner. They’re still a family and they’ll always be strong enough to come back together.”