Home and Away airs more drama for Tori Morgan and Martin ‘Ash’ Ashford on 5STAR tonight (June 27) as they struggle to decide whether they’re better off together or apart.

Wednesday’s first look episode sees the pair realise they have a big choice to make after giving into temptation and sharing a kiss.

The former couple initially decide that the romantic moment meant nothing, despite the obvious chemistry between them since Ash’s return to Summer Bay.

Going into denial, they decide that it’d be for the best if they forgot the kiss ever happened, but as the day continues, it seems that’s actually going to be much easier said than done. 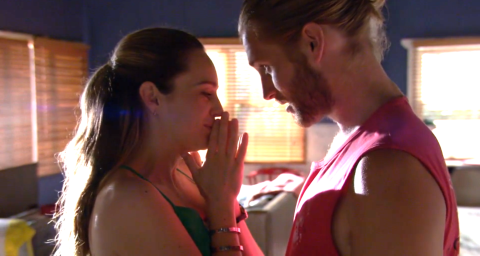 After much deliberation from both parties, Tori (Penny McNamee) and Ash (George Mason) meet up for a second time and talk about their kiss more honestly.

Ash finally confesses that he came back to the Bay for Tori, while Tori also can’t deny what she felt for him the night before.

Although they’re still slightly unsure, Tori and Ash end up kissing again – throwing caution to the wind in the heat of the moment.

It seems this on-off couple are back on yet again, but with Ash due to leave Summer Bay on UK screens in a few weeks’ time, could this tentative reunion be short-lived?