How Aneesa Paved The Way For Powerhouse Women On The Challenge 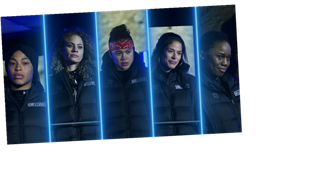 In keeping with a curse that’s nearly as powerful as the Bambino’s or Billy Goat’s, Aneesa Ferreira, who’s been competing on The Challenge since 2002’s Battle of the Sexes, was eliminated on the most recent episode of Double Agents. Though she’d sent home powerhouse Tori and racked up three daily wins en route to the end of Season 36, she was snuffed out at the last second by Big T in “Fire Escape,” a hog-tied race that didn’t play to her strengths.

“Losing before the final has been my reality for the last however many seasons,” Aneesa lamented. “[But] this loss feels so different…this is the one where I kind of left it all out there.”

And leave it out there, she did — when Aneesa said in the preceding Crater deliberation that she helped to pave the way for the game’s current crop of powerhouses, she wasn’t kidding.

Well, let’s not forget that — though she lost to Big T — Aneesa is an established elimination-round assassin. In her 19 years and 14 seasons competing on The Challenge, she’s racked up 10 wins (that’s in addition to 30 daily wins) and set a record for most elimination-round appearances with 21. She was so feared on 2005’s Gauntlet 2, her first season to feature elimination rounds, that Beth quit on the spot simply for learning that Aneesa was her opponent.

“I hope Beth is shaking in her boots because I’m ready to kill that b**ch,” Aneesa famously observed before leading the Veterans team to her first final as female captain.

(And as for Gauntlet 2 quotes, Aneesa was full of ’em: Lest we forget she challenged Cara to “suck my d*ck, bitch” during a heated argument, and later observed — also of Cara — that you “can’t turn a ho into a housewife.”)

And while Gauntlet 2 involved maneuvering through a team format, it was 2006’s The Duel — the season that reduced The Challenge to a single-player format — in which Aneesa more demonstratively began to emerge as a powerhouse. Forced into an alliance of survival with fellow misfit Svetlana, Aneesa took out Paula in the series’ first-ever installation of “Pole Wrestle,” settled a score with Robin by beating her in “Ascender” and sent Diem packing in “I Can.”

And 2009’s The Duel 2 took her even further. Again, Aneesa found herself as the game’s resident punching bag, but never said die, and eliminated Shauvon, Paula and Tori to land a spot in her second final.

Sadly, The Duel franchise also officially generated Aneesa’s curse of the eleventh-hour elimination, as she was the last woman to be sent home on the show (eventual runner-up Svetlana edged her out for the last finalist’s spot). Aneesa would later be the final woman sent home on The Inferno 3, Rivals II alongside Diem and Bloodlines alongside her cousin Rianna. And, to add insult to injury, she was the penultimate woman eliminated on Total Madness.

But even before kill-or-be-killed was a staple of the game, Aneesa wasn’t afraid to make waves. On her introductory Battle of the Sexes, she stuck out her neck to plot to oust Road Rules emblem Emily from the game. Emily had used her power in the game to vote off feared competitors like Rachel and Veronica as a means to secure her own standing on the women’s team, a routine that Aneesa saw as unsportsmanlike.

“That’s not teamwork to me,” Aneesa said, who was eventually eliminated for her strategy but widely lauded for it.

So will Aneesa’s win ever come? Here’s hoping. In the meantime, she said she’s thrilled to have achieved one particular goal on Double Agents, though it came at the expense of her own standing in the game.

“The one thing I wanted was a woman of color winning, and there’s nothing left but women of color,” she said as she took her final steps away from the game. “My purpose is fulfilled ,and I feel incredible that I was a part of it.”

Be sure to see if Aneesa can finally break her curse when The Challenge: All-Stars starts streaming on April 1 on Paramount+.