RITA Ora has a fancy new set of friends.

You might have heard of them. There’s Russell Crowe, Christian Bale, Sacha Baron Cohen and Isla Fisher to name but a few. 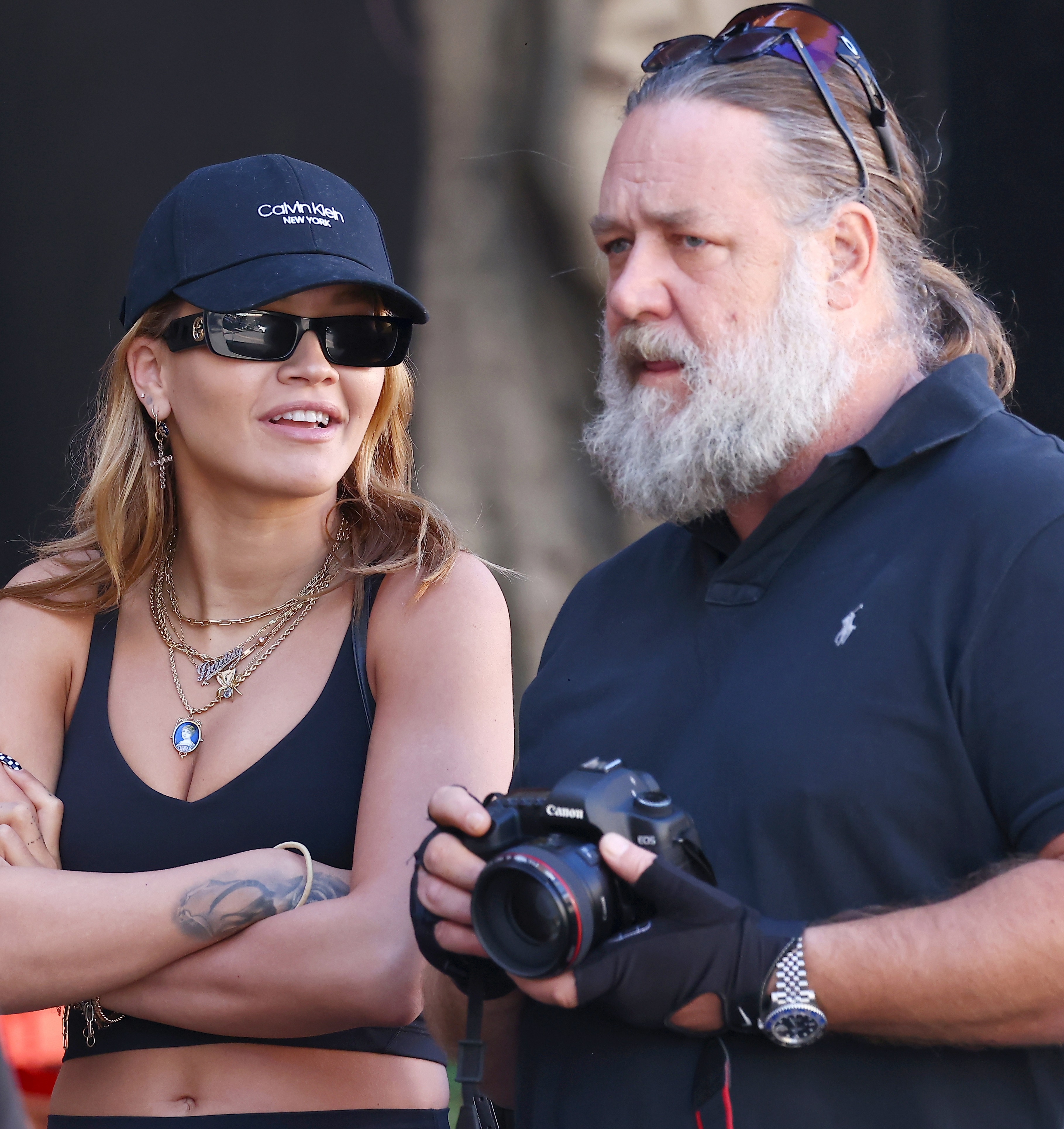 This week, Rita, 30, was spotted rubbing shoulders with those A-listers at a very swanky restaurant in Sydney, Australia.

Recently, she has also been spotted chumming up with hunk Chris Hemsworth and his wife Elsa Pataky.

Her place amongst the toast of Tinseltown is down to her new relationship with Oscar-winning Thor director Taika Waititi.

Not bad for someone who once hung out with X Factor contestants and the cast of The Only Way is Essex. 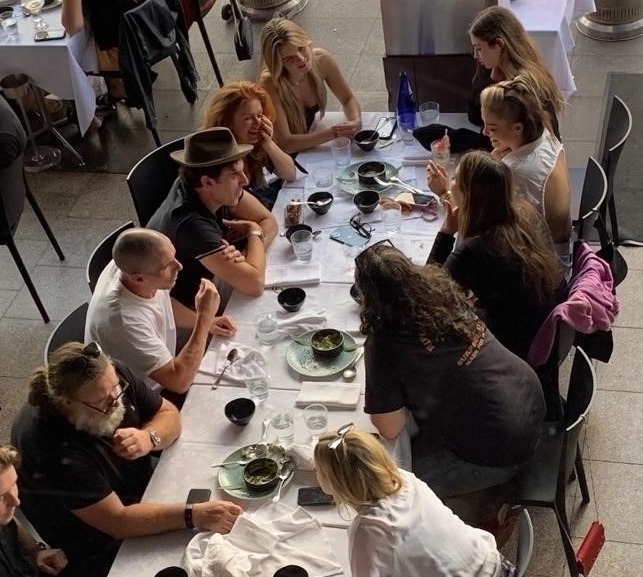 Here, we take a look at how the popstar and Masked Singer judge has romanced her way up the showbiz ladder.

You can’t get much more glittering than an Oscar and Rita’s current beau, Taika Waititi, has one on his mantlepiece for his black comedy, Jojo Rabbit.

The 45-year-old Kiwi is now directing Thor: Love and Thunder, meaning some of the biggest names in Hollywood have decamped Down Under.

Meanwhile Rita is working as a coach on The Voice Australia, and the pair have been secretly dating for months.

Through dad-of-two Taika, she has chummed up with most of the Thor stars.

She has been on a bike ride with Gladiators hero Russell Crowe and his girlfriend Britney Theriot, taken a private jet with Chris Hemsworth and his Spanish model wife Elsa Pataky and hung out with Brit hunk Idris Elba and his wife Sabrina. 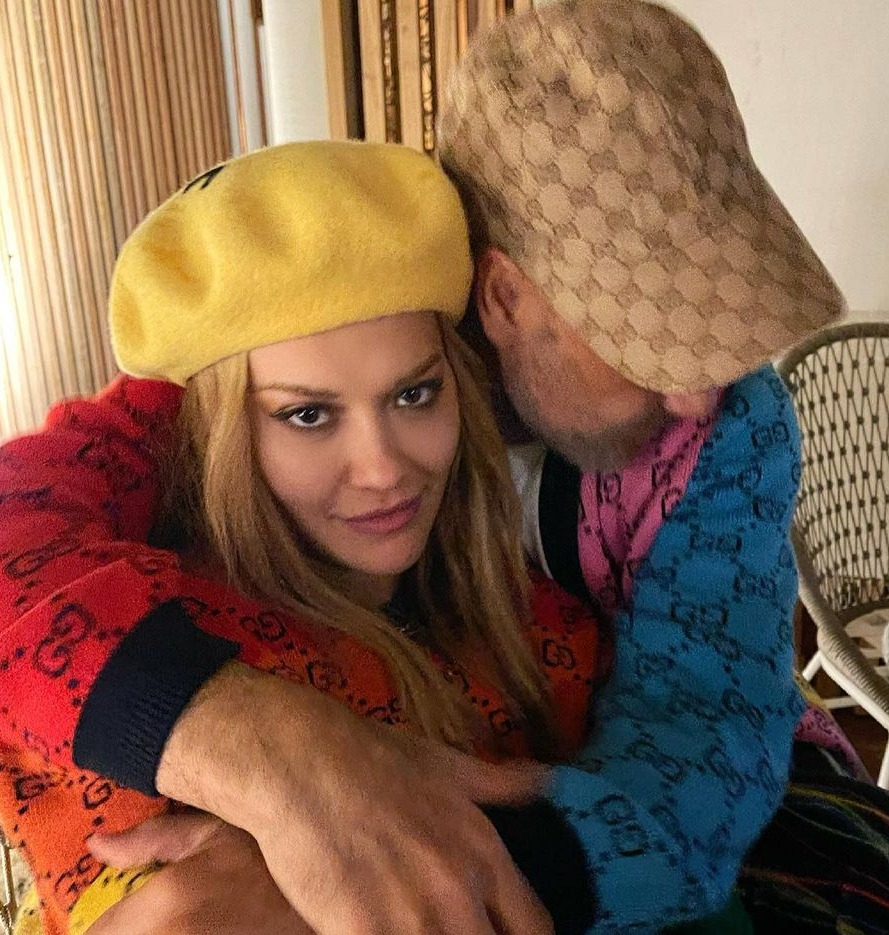 It’s not the first time the Hot Right Now singer has dated someone in the film industry.

In 2018, she had a four-month fling with Spider-Man actor, Andrew Garfield. They split in March 2019, reportedly because he wanted a “more private life.”

A source told The Sun at the time the pair had spent Christmas together and Rita was “cut up” about the split. 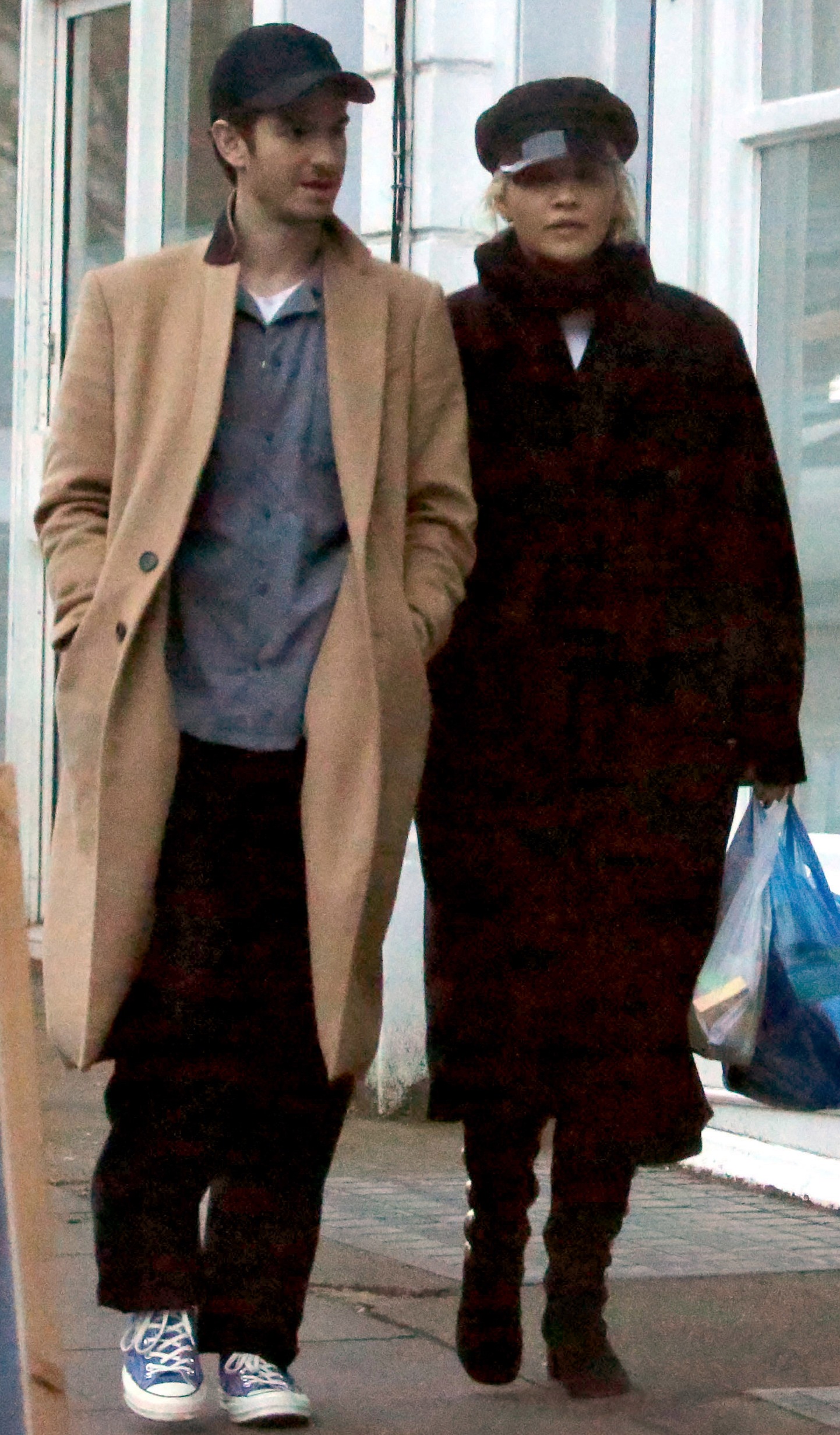 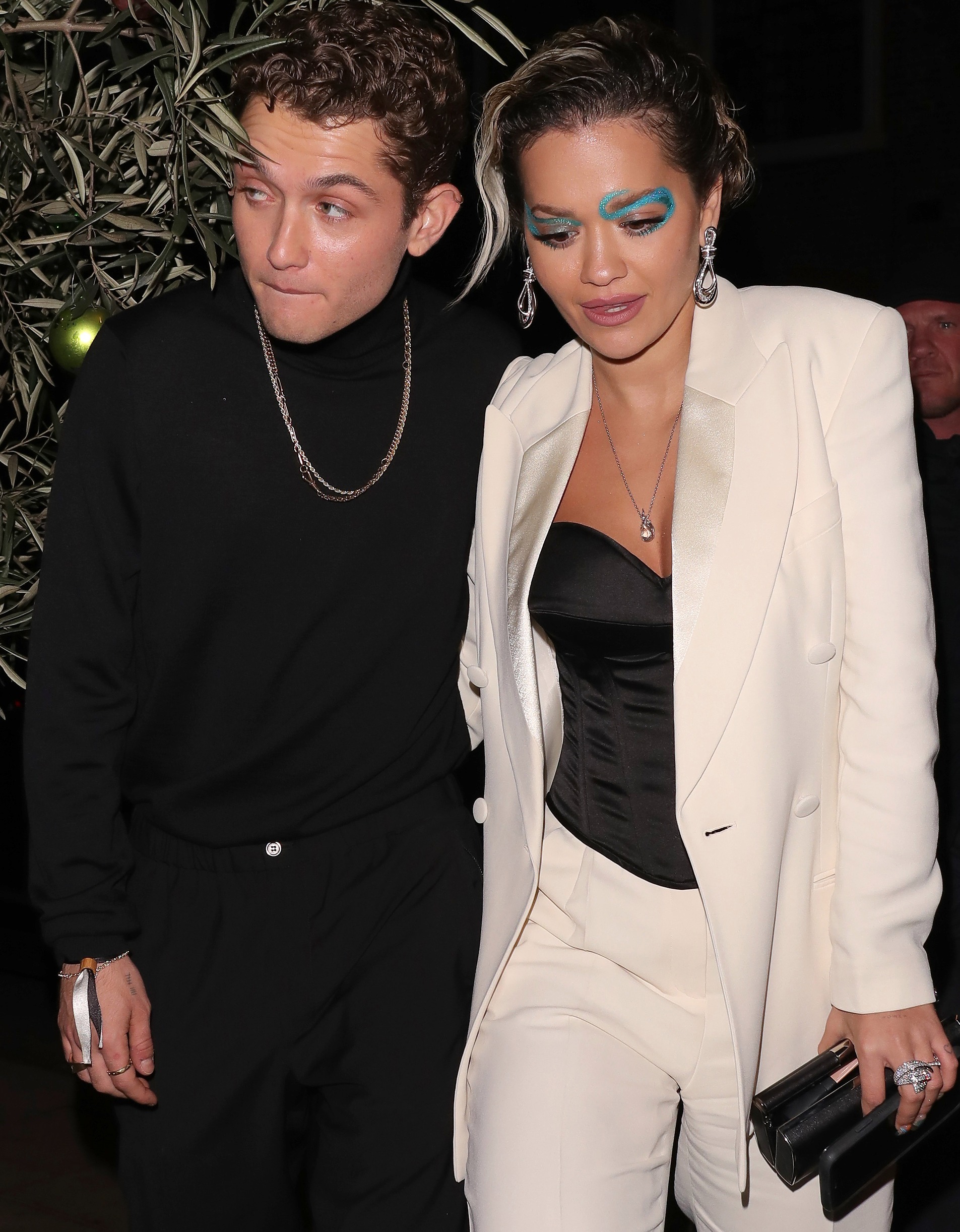 With a clutch of number ones and collaborations with the likes of One Direction’s Liam Payne and popstar Charli XCX, Rita is already top of the pop music scene.

In terms of romantic duets though, her chart progression has moved up and down.

The biggest music star she has dated was Bruno Mars – but that was when they were both unknowns, in 2009.

Rita, who met the Uptown Funk singer through their record label, Roc Nation, said: “I was 18. He was a struggling songwriter hired to write songs for me.

“It was love at first sight.”

Fame killed off their fledgling romance. 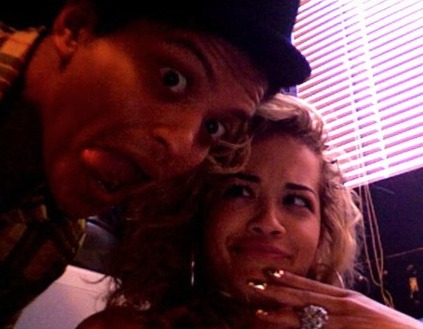 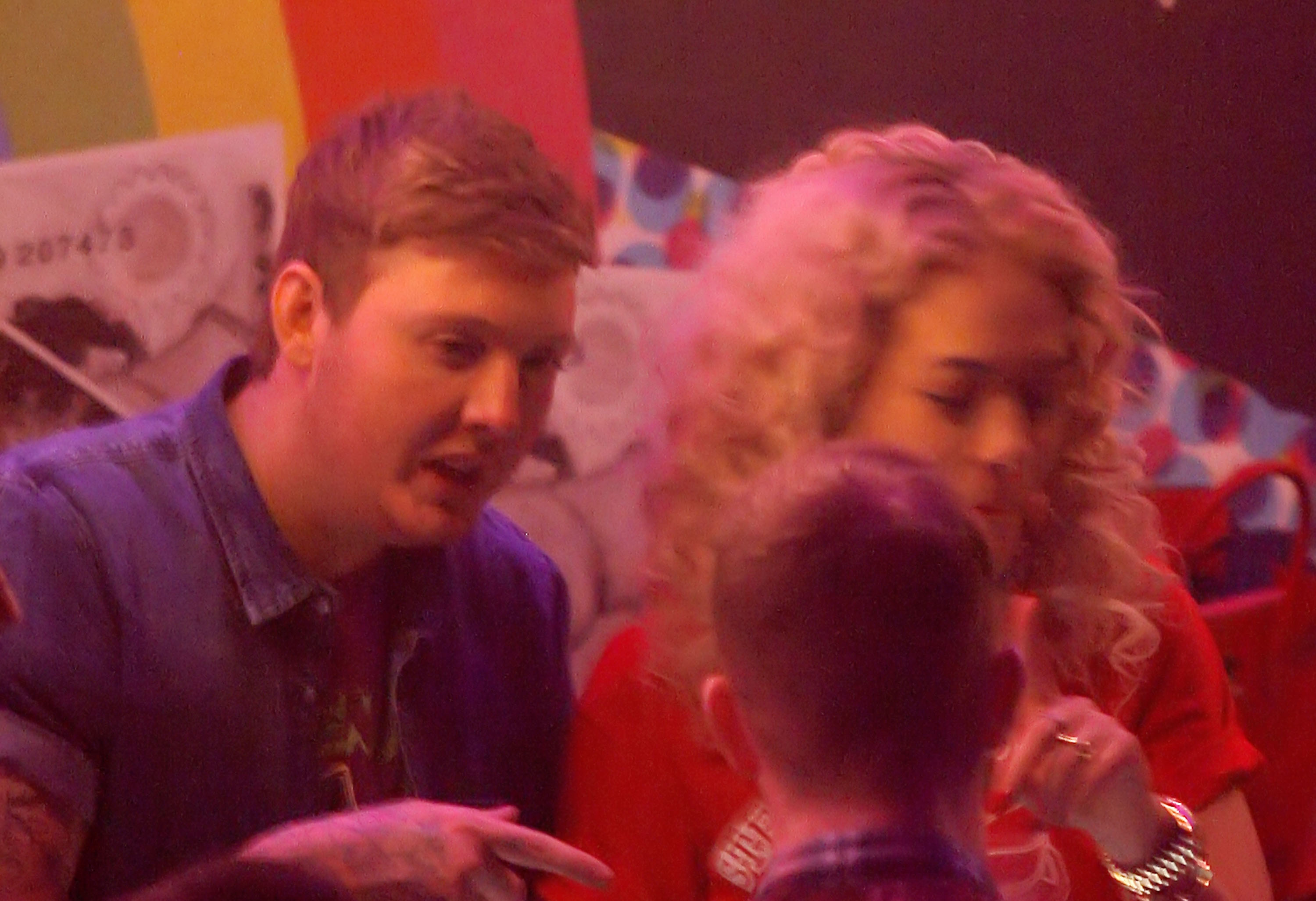 In 2012, she hooked up with X Factor winner James Arthur, who revealed in his autobiography that their “magical nights” turned him into a sex addict.

After she dumped him, the Middlesbrough singer went onto romp with Babestation glamour models three times a day. Last month he expressed regret for oversharing about his relationships.

After James, Rita went up the love charts with global superstar Calvin Harris. They had an on/off relationship between 2013 and 2014 which all ended in trauma and a long running feud over Rita’s right to use material they had collaborated on. 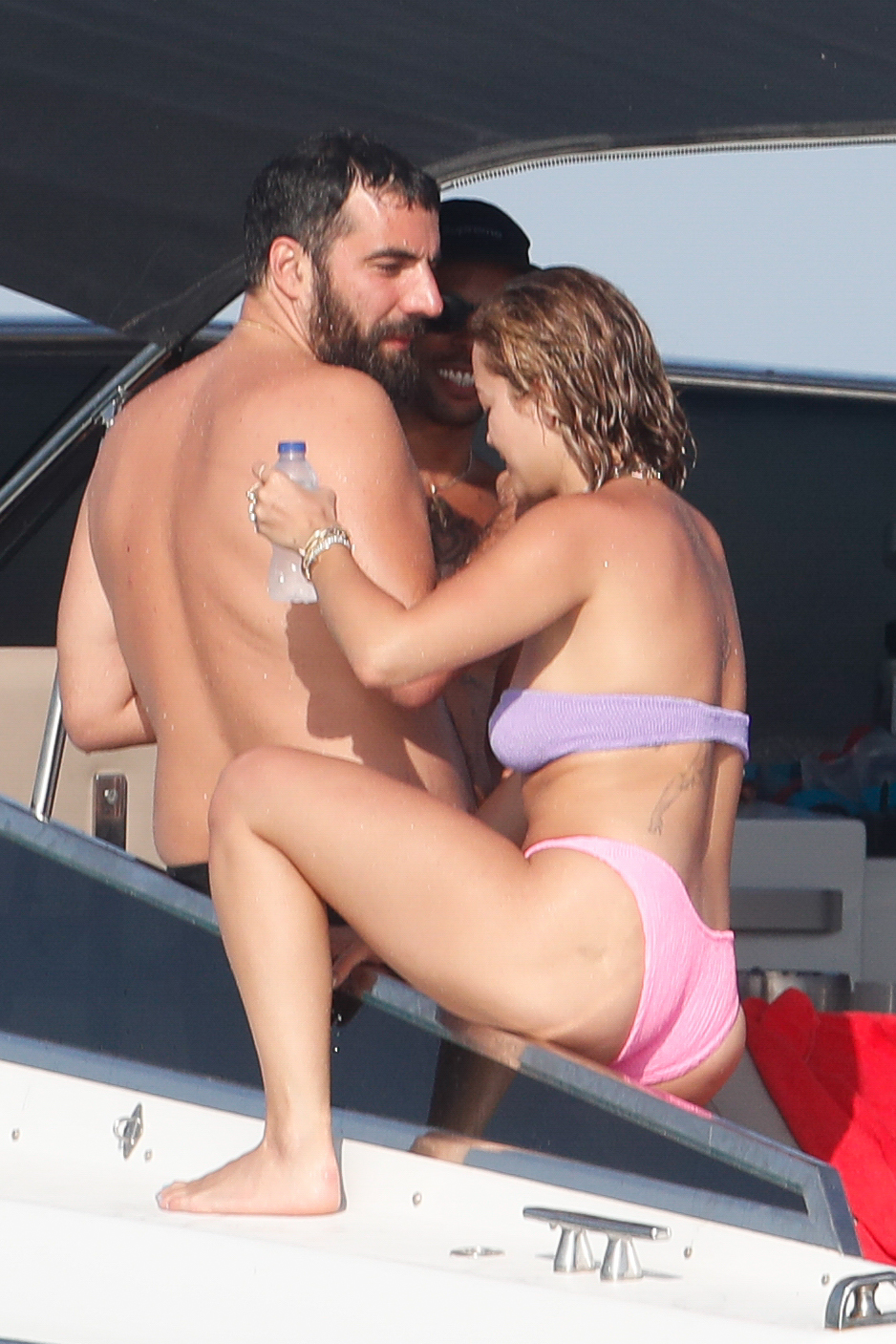 More recently, Rita’s choice of musician has been more of the behind-the-scenes variety, with relationships with producer Andrew Watt, whose contacts book stretches from Ozzy Osborne to Justin Bieber, and French-Greek music director Romain Gavras, who has worked with the likes of rappers M.I.A, Kanye West and Jay-Z.

In March, Rita’s spokesperson confirmed she and Romain had split “months ago” due to “work commitments.”

Rita’s love life has also seen her dip a toe into the fashion world.

She dated Ricky Hilfiger, son of fashion designer Tommy who goes by the name Ricky Hil, for a year.

The match with the tattooed American brought her into the FROW of the fashion elite – with Rita appearing on the green-haired rapper’s arm at New York Fashion Week in 2015. She also accompanied him to the opening of a new Hilfiger store in Paris that year. 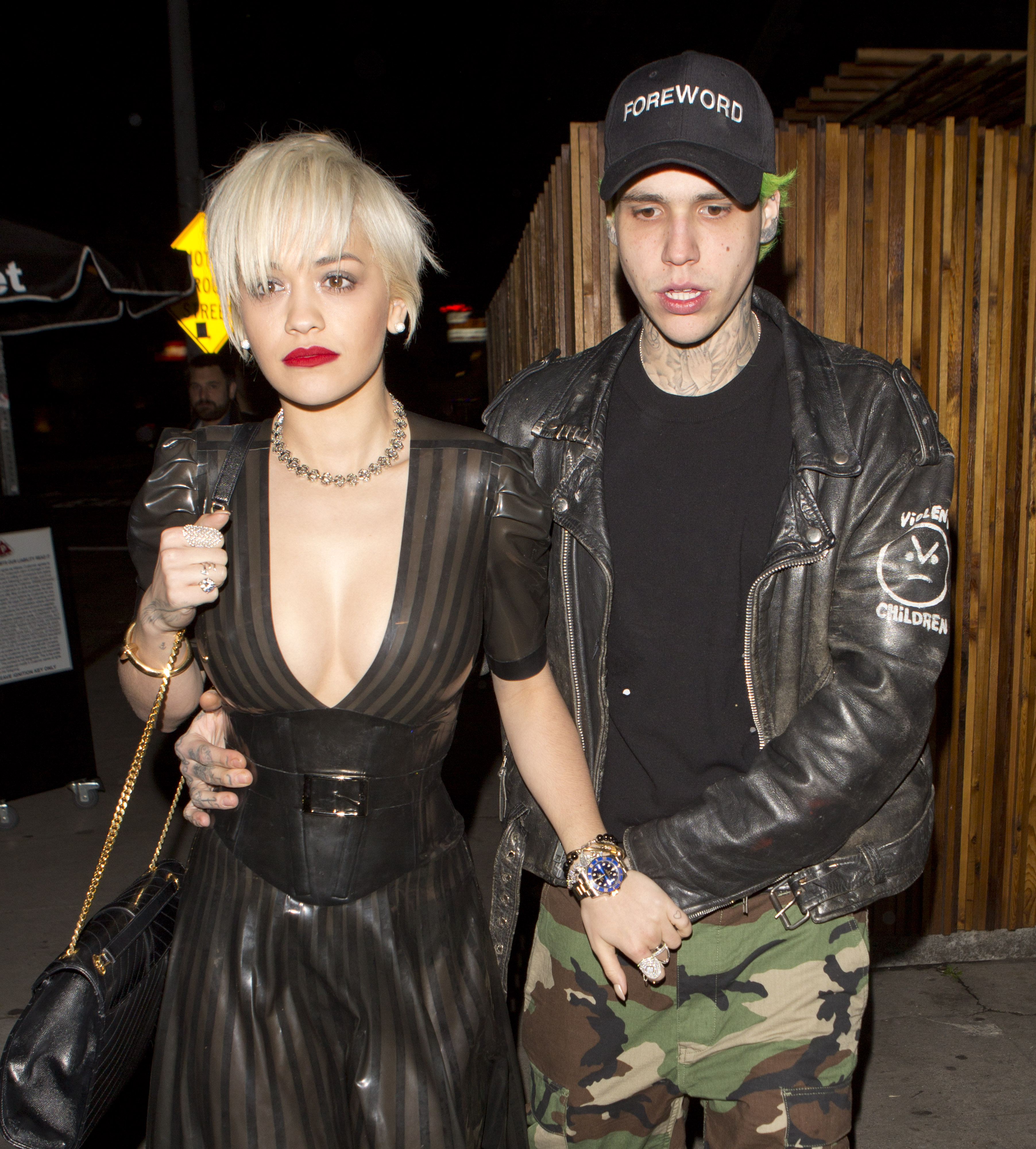 Page Six reported they split because Ricky was unhappy at her “flirtatious behaviour,” while another report suggested he struggled with Rita’s success and fame on the X Factor.

Not long after their split in July 2015, Ricky appeared to refer to his ex in a track, rapping: “Baby, you f*** me better than them other girls.”

A couple of months later, he was arrested for battery after alleging punching a bouncer in Miami, USA, disorderly conduct and possessing marijuana.

If you want to get noticed, date a Kardashian.

And Rita did just that, with Kim’s brother, Rob. She said afterwards she never thought it was “actually a relationship,” adding: “I never mentally defined it as girlfriend/boyfriend.”

In fact, so insignificant did she view their two month fling from October to December 2012 that, when asked about it last year, she admitted: “Oh I forgot about that!”

She would probably rather not remember the sock designer’s bitter Tweets after they split in which he accused a mystery ex of cheating on him “with nearly 20 dudes.” 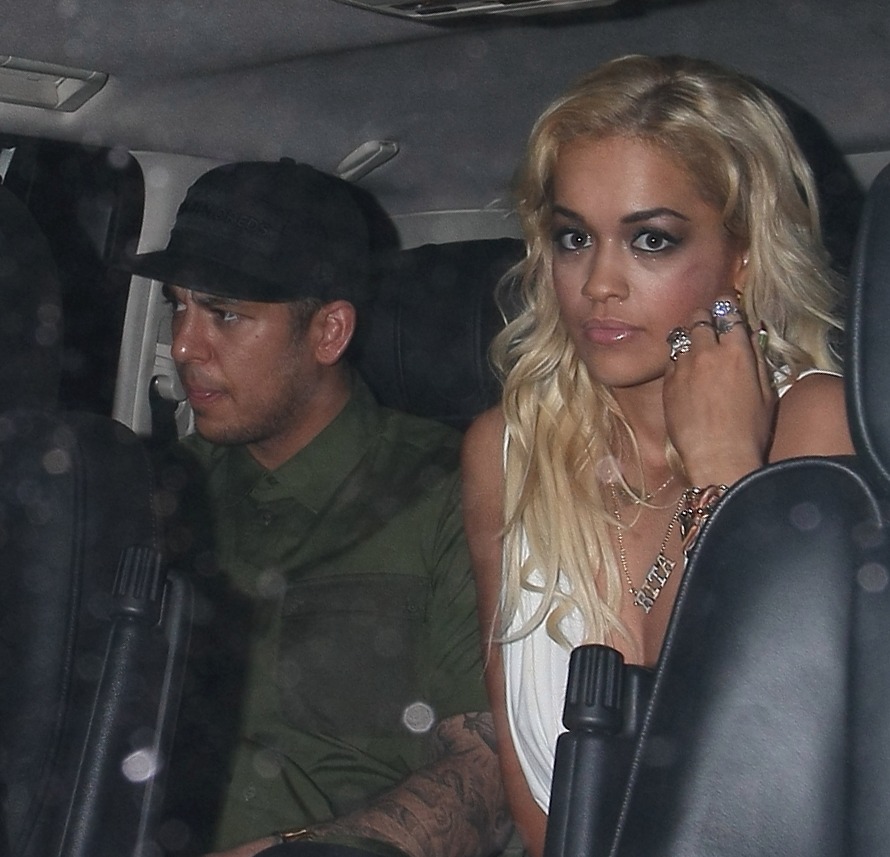 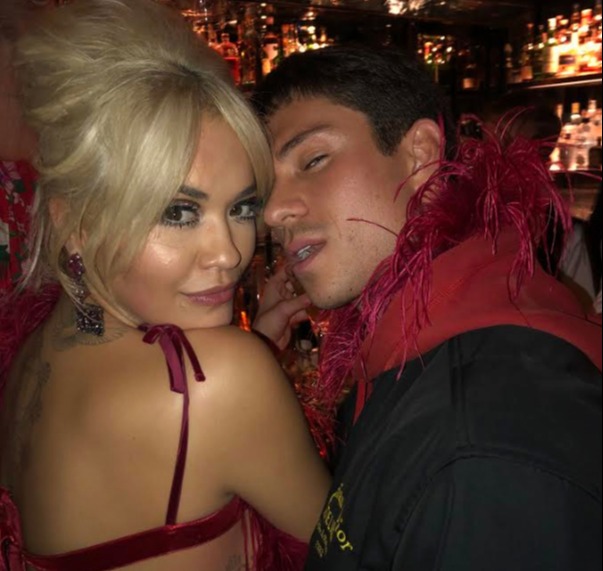 From KUWTK to TOWIE, Rita admitted last year she was “obsessed with” Joey Essex.

In March 2020, the “Reem” reality star was spotted heading into Rita’s London mansion at 4am, emerging 13 hours later, looking very pleased with himself.

Rita denied there was any romance, while Joey said they were “just friends.”

If you can’t get in with the Kardashians, how about the next big celebrity family?

The Sun revealed in 2019 that Rita had secretly dated Brooklyn Beckham two years earlier, when she was 26 and he had just turned 18.

They were pictured gazing into each other’s eyes at The Electric, a swanky bar and cinema in London’s Notting Hill, in May 2017. The following month, they partied together at Glastonbury Festival. 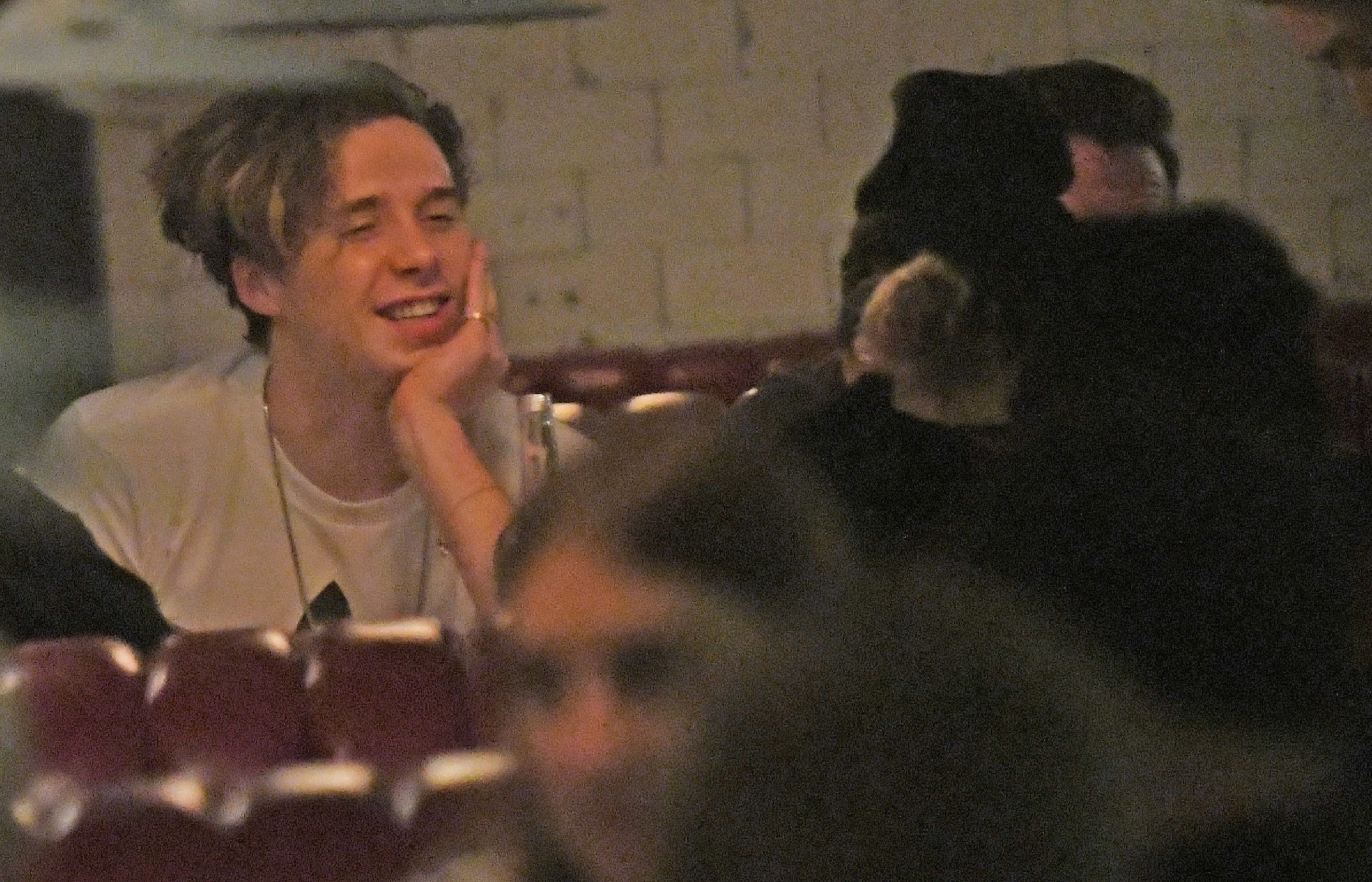 The match did not impress Victoria one bit, who ordered the pair to stop their flirty texts and clandestine meetings.

A friend told us: “She made it clear she didn’t approve.”

David Beckham wasn’t happy either. Rita was rumoured to have dated his best pal, football agent Dave Gardner, in 2013.

She and Dave – who is divorced from Hollyoaks beauty Davinia Taylor  – were spotted holding hands and whispering into each other’s ears at the BRIT Awards that year.

Okay, they never dated – not as far as we know anyway – but Rita has struck up a friendship with Prince Harry. 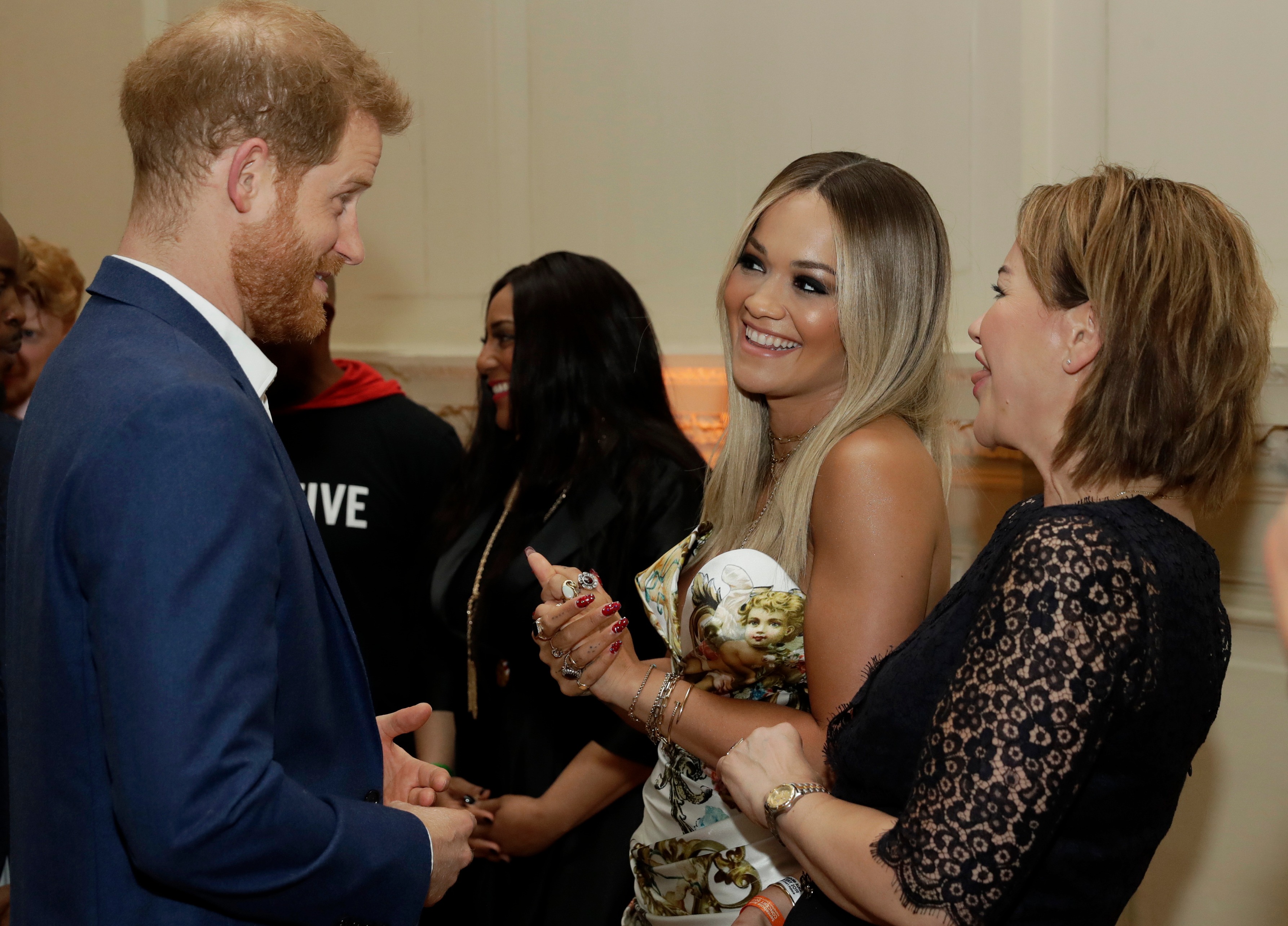 She said: “Every time we see each other, I’m always surprised how much he remembers about the other conversations we’ve had.

“He’s a proper laugh, and he listens."