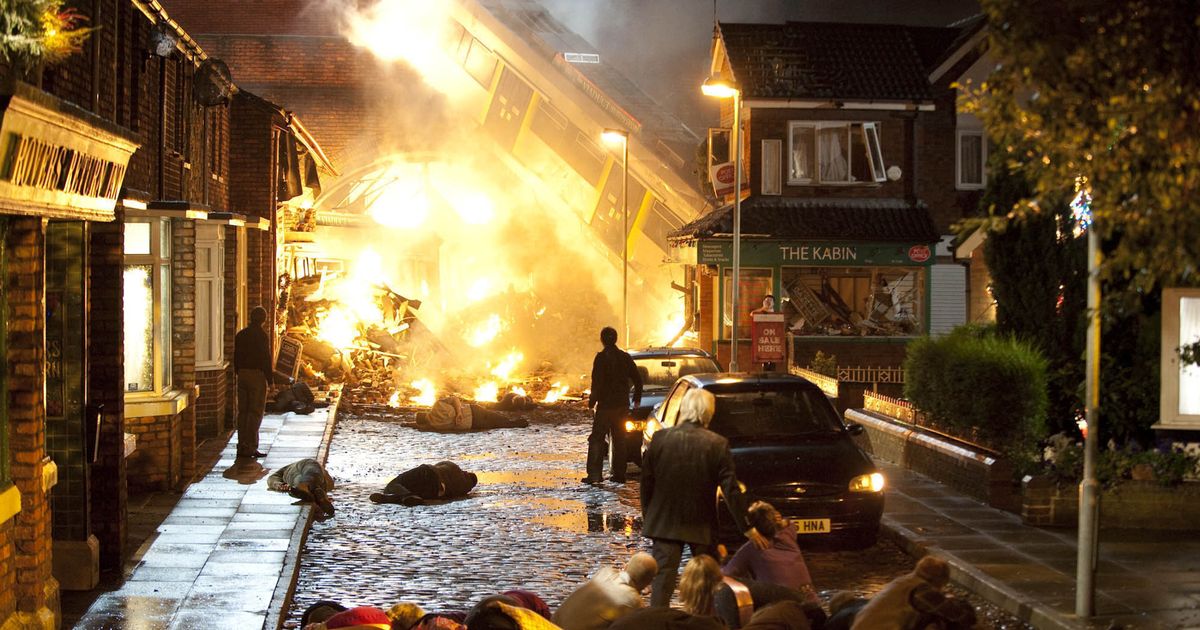 Coronation Street boss Iain MacLeod has confirmed speculation around a week of death and disaster for the soap in ITV’s signature ‘Super Soap Week’ – with star Sally Carman teasing that it could even rival the tram crash.

Back in 2010, Corrie marked its 50th anniversary with a colossal event, which saw an explosion at The Joinery de-rail a tram from the viaduct and onto the properties below. It killed three major characters plus the train’s driver.

In order to bring the soaps back with a bang post lockdown, ITV chiefs announced a major event week of soap for October.

Pictures have already been released of a prison van crash, which fuels speculation that Harvey Gaskell will escape for revenge, as Will Mellor has confirmed a return to filming during night shoots.

But other major strands will be involved, with Mollie Gallagher teasing to Metro.co.uk, that Nina will be drawn in.

Speaking to us exclusively at the National Television Awards, the Best Dramatic Performance winner said: ‘Nina goes on an emotional rollercoaster these next few weeks which is understandable after what she’s been through, but we’re going to see some quite erratic behaviour from her.

‘The scenes we’ve been filming are amazing, so atmospheric, the set design is unreal, it’s been great to be a part of it’

‘I’m on night shoots. There are stunts galore and it’s been so much fun! It’s one of those storylines that, as an actor, you just go: “Oh come on! Let’s have it!” It’s brilliant.

‘I’m delighted to be part of it. When we were in studio last week doing the stunts, I was just pinching myself! I was just like: “How do I get to do this?”

‘I’m really really happy. It’s funny, in real life things wouldn’t automatically go to the lengths that they do sometimes, but that’s the beauty of being in a soap, you can just push the boundaries.’

After accepting the award for Best Continuing drama, soap chief Iain continued: ‘We don’t have Chekhov’s gun in our stories but we do have Chekhov’s sinkhole.

‘We’ve tried to look at the last 12 months and the limited way in which all soaps have been forced to tell their stories, and try to subvert that and go “we’re back”.

‘It’s a statement of intent that we wanted, as a show, to put out there – to make something we couldn’t possibly have made in the past 18 months because the pandemic wouldn’t allow it.

‘When you do a story of a certain scale and at a certain level of spectacle the viewers expect there to be significant aftermath to it and significant outcomes.

‘So yes, I can confirm that Chekhov’s sinkhole will result in a death.’

Sally added: ‘It’s going to be so big it will rival the tram crash. You’re going to have your socks blown off.’