Ian crushed as he discovers Sharon is trying to kill him in EastEnders? 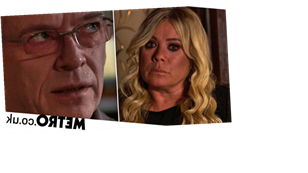 Is Ian Beale (Adam Woodyatt) about to discover that wife Sharon (Letitia Dean)is plotting to kill him?

A newly released EastEnders trailer sees the Walford business magnate looking very suspicious indeed as Sharon places a dish of potentially poisoned garlic bread in front of him. So, might he be on to her twisted plan to take his life?

It was revealed at Christmas that Sharon and Phil (Steve McFadden) are in cahoots to get vengeance on Ian for the part he played in young Denny’s death on an ill-fated boat trip down the Thames back in February 2020.

And it’s fair to say that Sharon’s recipe plans for her supposed beloved won’t be found in any cookbook, what with each meal being laced with crushed-up pills.

It now looks as though Sharon will continue to get good use out of her mortar and pestle for the rest of January, but despite being in an increasingly weakened state, Ian may just twig that his food has been tampered with. Next week’s drama will find him growing increasingly concerned about the state of his health and paying a visit to the doctor in order to get advice. But can Sharon dissemble successfully as she sits by his side?

EastEnders did, of course, feature arguably the best-remembered poisoning plotline in soapland history when Nasty Nick Cotton (John Altman) doctored a meal he’d prepared for his unsuspecting mum Dot (June Brown) in order to get his hands on her cash.

On that occasion, Nick eventually backed out of his plan to do away with his dear old Ma, but there’s no guarantee that Sharon will now have the same crisis of conscience.

All we currently know about the culmination of Ian’s high-stakes storyline is that actor Adam Woodyatt will be taking an extended sabbatical away from the BBC1 soap.

The 52-year-old star, whose association with EastEnders dates back to its first episode in February 1985, is due to star later this year in a touring stage adaptation of the Peter James crime novel Looking Good Dead. Let’s hope that his Albert Square alter-ego doesn’t first meet his maker…