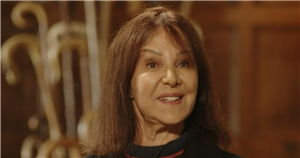 I'm A Celebrity fans were left with their jaws on the floor as Dame Arlene Phillips' real age was confirmed during the launch show.

Ant McPartlin and Dec Donnelly welcomed a fresh back of 10 famous faces to Gwrych Castle on Sunday evening.

One by one the first four celebrities were driven through the Welsh mountains to arrive at a stately home.

David Ginola was the first to arrive followed by Kadeena Cox.

Arlene was next to join them followed by Matty Lee, they all got to know each other and wondered where the other celebrities were. As the celebs got to know each other, viewers at home were distracted as choreographer Arlene confirmed she's 78 years old.

A third person posted: "I love Arlene Phillips she is an icon. I refuse to believe that she is 78 years old she looks wonderful." On her way to meet her fellow campmates Arlene said: "I have become a Dame, but it’s a title I actually forget about.

"I will be expecting everybody to rally around. And if they don’t, maybe the Dame bit will come out.

“I am scared of everything. I’ve seen everything on this show that I can’t do. There’s nothing in there that doesn’t scare me." Speaking to her fellow campmates, Arlene said of coping in the castle: “I always say, dance it out, you’ll be fine.”

Before entering the Welsh castle, Arlene warned she'll be a nightmare because she's obsessed with being tidy.

She told the Daily Star Sunday: "One of the hardest things for me is that I am totally, obsessively tidy.

"I irritate people to the core when I pick up a newspaper that either isn’t folded correctly or has just been put on one side and my partner or my daughter hasn’t read it. I drive them mad."