Over the eight-part series, Indian Matchmaking charts the romantic endeavours of several singletons from the South Asian community, whose families have enlisted the skills of matrimonial expert Sima Taparia to help their sons and daughters get married. The Netflix series sees Taparia travelling from India to the United States to help her clients find proposals (prospective suitors). Once Taparia has received a list of criteria from her clients, she then gets to work trawling through her extensive database which is said to have up to 500 names to find a suitable match.

Taparia then presents the bio data – essentially a dating CV complete with qualifications – to her clients, allowing them select the most suitable candidate with the two singles then going on a date to see if there’s chemistry.

As mentioned in the series, marriage in South Asian culture is a union between two families rather than just a couple. Unlike regular dating, with matchmaking the courting process will be short and the focus is on getting down the aisle.

For those unfamiliar to the ways of South Asian dating customs and marriages, it offers a rare insight into the world of matrimony. Crucially, the programme stresses arranged marriage doesn’t force singles to get married – a commonly held misconception with the two often used interchangeably.

Arranged marriages and matchmakers are akin to a dating service in South Asian Communities. Although with the advent of online dating apps catering to all types and preferences.

Nevertheless as Indian Matchmaking shows, there can be huge amounts of pressure from parents and other family members to get a single person married off. Indian graduate Akshay Jakhete is continually told off by his mother for not trying the knot yet and she even puts a schedule on his impending nuptials. In fact, she even says his single status is sending her blood pressure sky high and says until Akshay is wed, her other son and daughter-in-law can’t have a child, inexplicably linking the two. 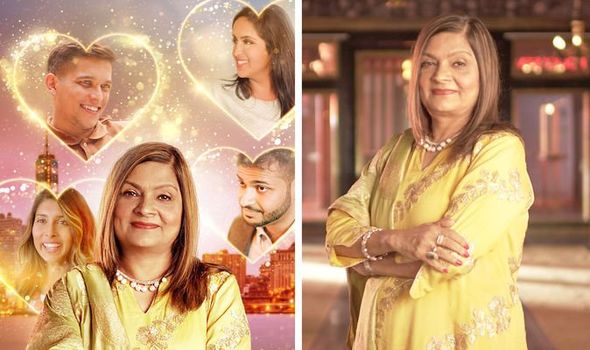 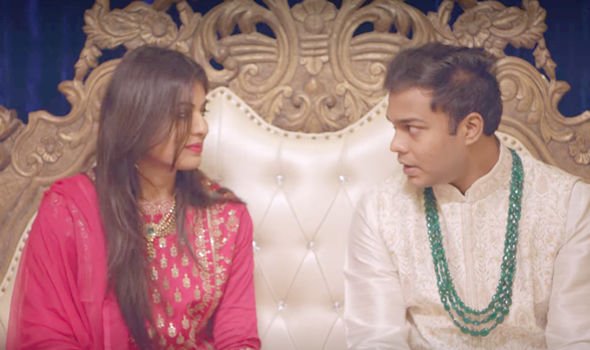 Although Akshay got engaged by the end of the show, the pressure was immense. He later confirmed he broke off the engagement but wouldn’t be drawn on the reasons why he called it off.

While in this day and age arranged marriages are not forced and singles have much more say, compared to their parents who reveal how they got married – in some cases not even meeting until their big day – it’s apparent the familial pressure is immense. This pressure is amplified by notions of honouring your parents and not shaming them in the eyes of the nebulous community as Aparna Shewakramani’s mother states.

However, the series has also received a backlash for perpetuating casteism, classicism, colourism as well as fat shaming. Additionally, the show has highlighted the stigma towards divorcees and single parents with criticism towards the patriarchal notions suggesting women must compromise and be flexible. Read: maintaining the house and caring for the children while their husbands go out to work.

Express.co.uk has reached out to Netflix for comment on the backlash towards Indian Matchmaking.

The singletons come from wealthy backgrounds with Pradhyuman Maloo’s closet even having a fingerprint encrypted lock as well as a separate wardrobe containing an enviable collection of outfits for the household gods.

South Asian singletons watching the series will be all too familiar with the rigmarole of proposals, marriages and the incessant grilling by aunties at community events over love lives.

While at its heart Indian Matchmaking is just another Netflix dating series with all the drama and comedy to its forebears Love Is Blind and Too Hot To Handle, some viewers may be wondering whether this is a realistic depiction.

Express.co.uk spoke to several members of the South Asian community about how accurate the show was and their experiences of dating, matchmaking and arranged marriages. 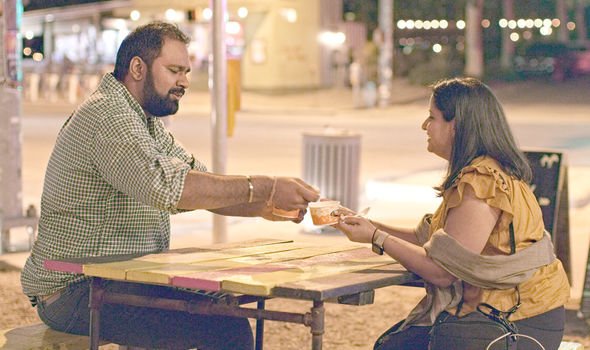 Raj has been happily married for 11 years after having an arranged marriage when he was introduced to his wife by his family.

Raj said all marriages – regardless of whether they’re arranged or love unions – required effort with no guarantees they will work out either way.

So, does he think the likes of Sima will be replaced by a data app? “I do not think technology will replace arranged marriages or introductions, but technology will be used to arrange introduction. It will give a wider reach to introduce and introduce… so tradition and technology hand in hand rather oppose each other.”

Shelina has been married for seven years after meeting her husband via an Asian dating website.

She said there was pressure from her mother in her teenage years to get married, however, her cousin intervened and so she felt the heat less.

Prior to meeting her partner, Shelina had tried some introductions but they didn’t work out for her

Shelina revealed: “Many times I was rejected because I’m too short, too dark, had no degree.”

She said she wanted to be the one to choose her partner rather than her parents, which is why she decided to try internet dating.

They met up seven days after talking, Shelina said: “Instantly, I knew he was the one.”

However, she is positive about families helping singletons meet prospective partners. “I think an introduction will work if they are compatible to begin with. There’s no point setting up people who have nothing in common.”

Reflecting on Indian Matchmaking, she said: “I loved the show. I think it’s very accurate. [The parents] want to follow everything traditionally – they got an arranged marriage young and it worked for them, so why not for their kids?” 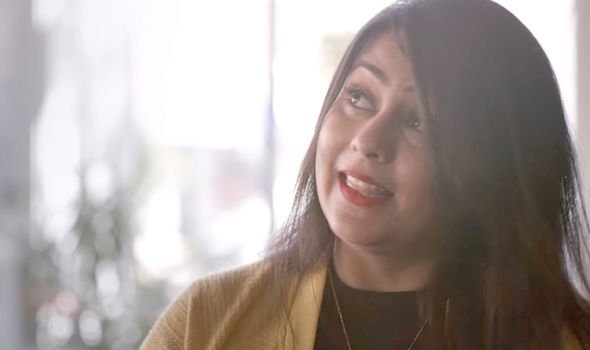 Anamica was married for two-and-a-half years after having an arranged married, before she and her husband divorced.

She said she felt pressure to get married from her relatives after her father died with warnings she would be “burden” to her widowed mother.

She explained: “I think I went along with it for the emotional aspect and wanting to please family.”

Despite her experience, Anamica seemed pragmatic about South Asian dating customs, saying: “I know some people have had arranged marriages and introductions and are happily married.”

She would also be open to a matchmaker like Sima working her magic to find her a husband.

On the series and its depiction of community, she said: “I do not think the show hasn’t shown anything which isn’t true of the South Asian community. Unfortunately as a community issues such as caste, single or divorced parents, widow, etc are things which our older generations have given a lot of value to.

“When I got married I was told my mum can’t bless me as she was a widower it would be bad luck. How can it be bad luck for my mother to bless me?”

Nazneen has been married for six years after meeting her husband via an online site, however, she said marriages and introductions “absolutely” work.

She said: “The end goal of arranged introductions is to give two people, who otherwise would never know each other, an opportunity to meet.

“In India, the chances of one getting married regardless of income or looks, especially in rural India, is much higher compared to the Western and Asian countries (China, Japan, South Korea). It’s this very fabric of arranged introduction that ensures a person gets several opportunities to meet a potential spouse.”

She explained online dating was a “very urban concept” with the majority of rural India still using traditional matchmaking to help singles find a partner, saying it would likely to be a “driving force” for a long time to come yet.

Nazneen said the Netflix show wasn’t a “fair portrayal of the matchmaking custom”.

She went on to say: “It almost stigmatises the process by showing people with only unreasonable expectations. The ‘aha’ moments panders to a crowd unfamiliar with the South Asian community, who find the very idea of matchmaking absurd.

“With a population of almost 1.7 billion people it’s unreasonable to paint the entire community with the same stroke of colour.”

Sapna is looking for the one and has been exploring all avenues both online and through family and friends.

On whether arranged marriage and dating could work, she said: “I do, if it is handled delicately. I believe it fails when one side doesn’t give the girl and boy the freedom to reject or change their mind.”

She went on to reflect on the programme, saying she found it “really interesting but anxiety provoking”.

Sapna said: “It opened my eyes up to actually how biased we are in our community. I liked that there was a wide range of people but because it was based in India and the USA, I don’t think it accurately reflected what matchmaking might be like in the British Indian community.”

She continued: “I think it did for India and America but I don’t really think that is how it works in the UK. There is still the pressure here to marry younger but also to have a professional life. The customs of a mother choosing for her son and being picky on behalf of the son is spot on. I’ve heard about this first-hand and seen [some] of this in my own circle where parents want something specific.

“I think it is really old school thinking to hold this much discrimination against a person you haven’t even met. Caste doesn’t mean as much now because it doesn’t reflect onto your personality. People get divorced for so many reasons and a single parent could again be a single parent for various reasons as well. None of these really reflect on your character, and your morals as an individual.

In terms of matchmaking versus online dating, she said apps were quickly becoming “the first point of call” and introductions were often the “last resort” digital methods were not working.

Sapna caveated this, saying: “However, there will always be a need for matchmakers and introductions because it is likely to be more organic and easier to realise if you are compatible.”

Sujata has been married for over a decade after having an arranged marriage.

She said of her decision to take this route: “Well my father had fallen ill and his health was deteriorating very quickly. My relatives were concerned that my father wouldn’t be able to see me married as that was one of his wishes. As I didn’t have a boyfriend, in other words single, my mother asked my husband’s aunt if she knew a good suitor for me. His aunt then said, ‘My nephew is looking for a bride. Why don’t we arrange a meeting between the two?’ And the rest is history.”

She was positive about introductions and arranged marriages, saying: “Yes for most people arranged marriages work. I’m happily married to my husband who I only saw thrice before marrying him. We did however speak over the phone over the 6 months that we were courting. It was the best decision I made as I don’t think I would have chosen a better life partner myself.”

However, she said technology was making it easier for people to meet each other. Nonetheless, there were also matchmakers for those who preferred a more traditional route.

*Some names have been changed