CATAPULTED into stardom overnight, Sarah Harding made sure to make the most of her newfound fame.

In the haze of the late noughties the Girls Aloud star’s life was a blur of London parties and hell raising trips to Ibiza. 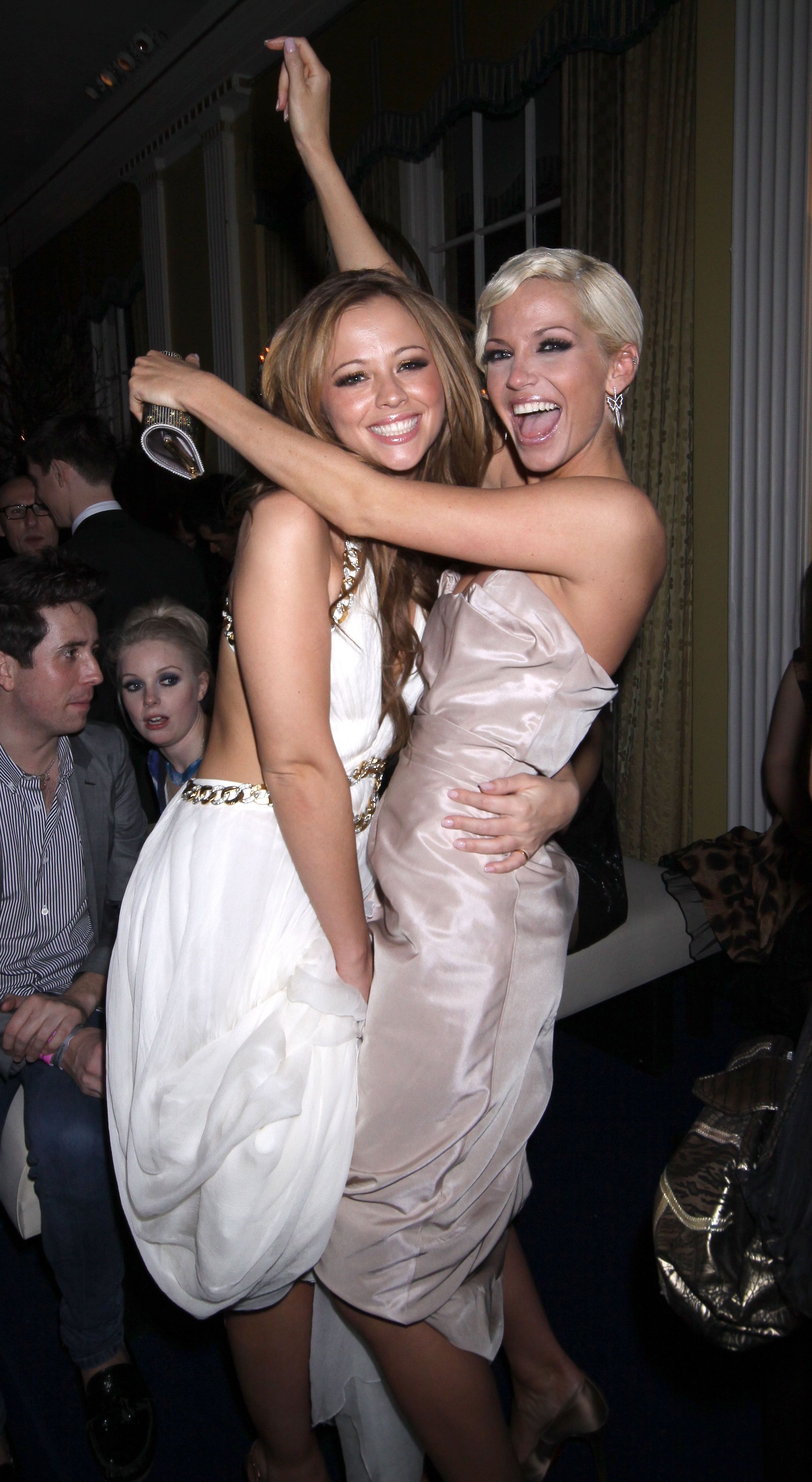 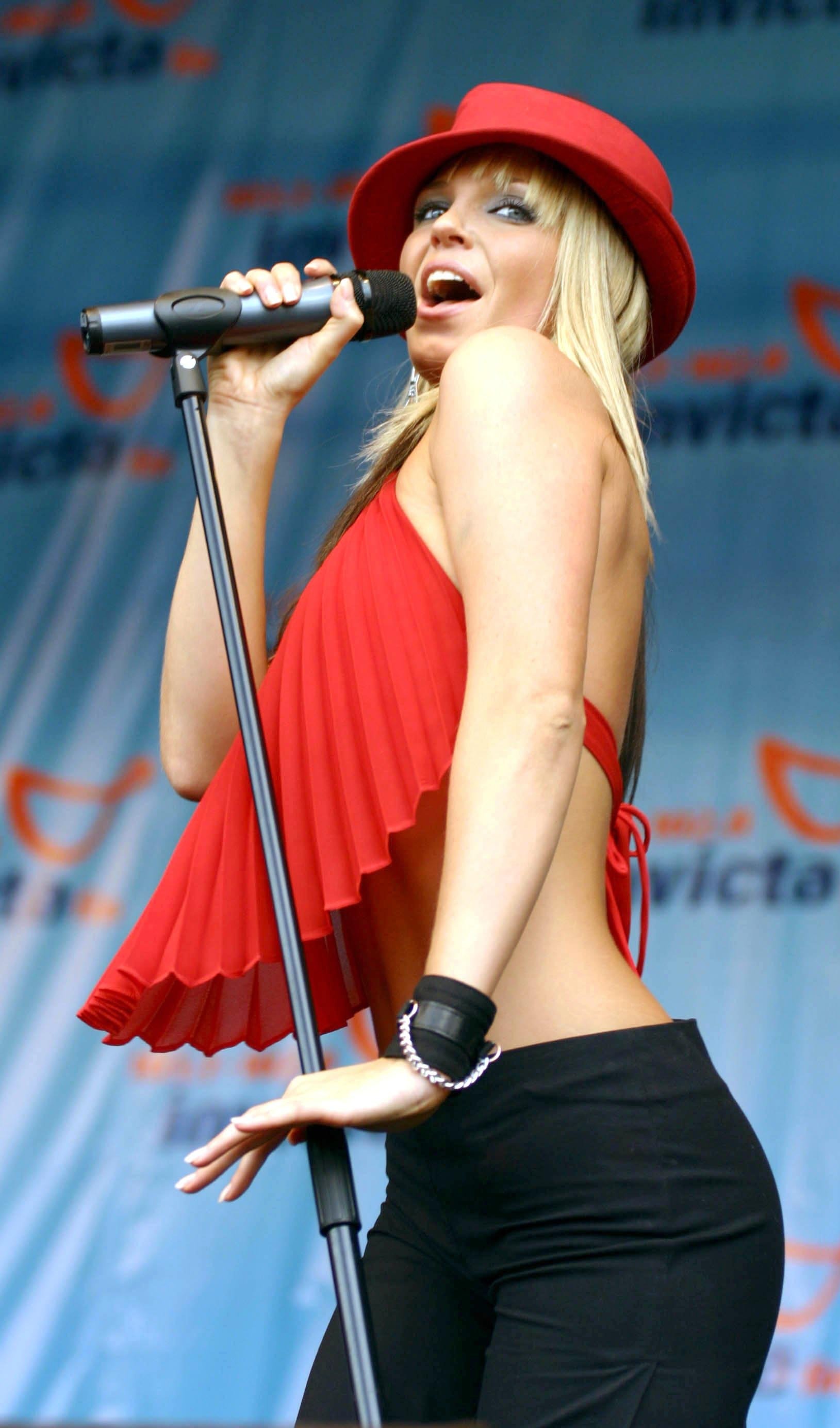 For the fun-loving singer lived her life by the same motto as her idol Marilyn Monroe: “Fear is stupid. So are regrets.”

The 39-year-old – whose death from cancer was announced today – certainly made sure she wouldn’t have any of those.

The vivacious blonde threw her all into everything that came her way – whether it was pursuing pop stardom and her acting career or embarking on whirlwind relationships with some of the world’s most eligible men.

But in recent years Sarah left the bright lights of the London showbiz circuit behind, moving to Buckinghamshire for the quiet life in the countryside with her dogs.

So quiet, in fact, that fans became concerned for her wellbeing. In 2019 it was reported that she had gone into hiding after her plans to make a music comeback stalled.

Sarah’s followers begged her to come back to her dormant social media pages. She eventually returned in August 2020 – but the reason was devastating.

The star bravely shared that she had been diagnosed with breast cancer earlier in the year. Worse, it had now spread to other parts of her body.

“I’m currently undergoing weekly chemotherapy sessions and I am fighting as hard as I possibly can,” she said in an Instagram post.

Sharing a photo of herself in hospital, she thanked NHS staff, her family and friends for their support, adding that she was “trying to keep positive”.

In her book titled Hear Me Out, she wrote: “…for a while, it seemed like the chemo was working”, but that a later MRI scan had revealed another tumour – “either at the base of my spine or on my brain”.

A second MRI revealed another tumour too.

She wrote that last December, a doctor had told her that “the upcoming Christmas would probably be my last”.

“I don’t want an exact prognosis,” she said. “I don’t know why anyone would want that. Comfort and being as pain-free as possible is what’s important to me now.”

It was fitting that Sarah would share her struggle with fans. She grew up in the public gaze after being plucked to audition on ITV’s Popstars: The Rivals aged 20.

Fame seemed the natural choice Sarah, whose musician father John had been in a band called Sunfighter in the 1970s. He introduced her to the microphone when she was only three years old.

Sarah – who has two half-brothers – started life in Ascot, Berkshire, but moved to Stockport with her family when she was 14.

As a teenager, Sarah flirted with trouble and walked out of school when she was 15.

Her parents also drifted apart and Sarah decided to change her surname from Hardman to Harding.

“I was a bit of a reprobate as a teenager,” says Sarah. “There are certain times when you go off the rails.”

As a result of quitting school, she ended up with no GCSEs. She was always set on being a singer but she was persuaded to study hair and beauty at her local college as a back-up.

“I never doubted that singing was what I was meant to do,” Sarah said. “I was doing gigs at 16, belting out all the big ballads like Whitney Houston and Mariah Carey.”

She did all sorts of jobs just to keep the money coming in, including waitressing at Pizza Hut, driving a van, debt collecting and as moonlighting as a BT telephone operator.

Sarah lost her chance to join UK one-hit wonders Sweet Female Attitude because she had to have her tonsils out and failed to make it through her 2002 audition for the talent show Fame Academy.

However, her audition for Popstars: The Rivals in the same year would prove far more successful. She was picked as the final member of Girls Aloud – although she was initially concerned that her dancing skills would let her down.

“I kept thinking I wouldn’t get through to the next round because I can’t dance. I just blanked,” she admitted.

She needn’t have worried. Sarah secured the last spot in the girl band and burst into the public eye when their debut single Sound of the Underground crashed its way to the top of the charts in Christmas 2002.

It would be no short-lived thing. Along with her bandmates Cheryl, Nadine, Kimberley and Nicola, she would go on to dominate the charts for a decade.
As her star rose, so did her penchant for partying.

Sarah attended all the hottest clubs and parties and in 2007 she was photographed swigging from a bottle of Scotch whisky after the NME Awards in London.

She might have been in one of the biggest pop groups in Britain but her antics were pure punk and won her the nickname “Hardcore Harding”.

“I never even enjoyed getting drunk before the band,” Sarah later said.
“The drinking was more to give me more confidence, especially when I was going through my little wild-child stage.

“It was trying to maintain that f***wit image that got me in all this trouble.”
Adding to the sense of chaos were rumours of tension and infighting in the band.

While many allegations have been disputed, Cheryl, Kimberley Walsh and Nicola Roberts formed a notably closer bond than the rest of the group.

Reports suggest the rift began because of lifestyle differences – particularly between Cheryl and Sarah. While Sarah loved to party, Cheryl rarely drank and preferred an early night.

As the pair started to bicker, the group split down the middle. Nadine later claimed the other girls were jealous of her getting the best singing parts.

“We were like sisters so of course it was never going to be plain sailing the whole time,” Sarah later admitted.

Calum later opened up about his 2006 romance with Sarah, describing their love as “eight months of madness”.

He said: “I was crazy, she was crazy and that’s why we hit it off from the start.

“It was a whirlwind, an intense, full-on, fiery relationship. But it was a good fire.”

But Sarah’s fire would eventually burn too brightly. She checked into a rehab facility in South Africa in October 2011, following the collapse of her relationship with DJ Tom Crane.

“I was drinking to deal with my emotions after the split,” she admitted.
“I just went mental. It took a couple of weeks to sink in and I went off the rails really badly.”

The star revealed that she had also been hooked on sleeping pills – with rehab helping her break her dependency.

She said: “Rehab was a depressing place to be with a lot of troubled people. I came off Zopiclone.

After getting clean, the star decided to take back control of her life. In 2014, Sarah decided to leave London’s trendy Primrose Hill in favour of the quiet life in the Buckinghamshire countryside with her beloved dogs in tow.

She said: “When I lived in London there was something going on every night of the week and you never wanted to miss out. I always wanted to be the life and soul.

“That’s not my priority any more, I’ve got five animals at home. I love animals — I think they are the best therapy ever.”

Sarah tried to launch a solo career in 2015, but her EP Threads failed to make the charts.

She had a punt at acting too after a promising film debut in 2009’s St Trinian’s 2: The Legend of Fritton’s Gold. Further success followed in 2015 when Sarah fulfilled a long-held ambition and landed a role on Coronation Street.

The bubbly star also became a reality TV favourite. But despite coming second in ITV’s celebrity gymnastics contest Tumble in 2014, she had to pull out of Channel 4 ski contest The Jump in two years later with an agonising torn ligament in her knee.

The painkillers she needed forced her to pull out of Ghost: The Musical in 2016. Cruel critics claimed she was slurring and stumbling on stage.

Sarah responded: “I’ve been in constant pain with my knee injury… it can take a massive toll on your mental as well as physical wellbeing.”

But she made a triumphant return to screens on Celebrity Big Brother in 2017, where she was crowned winner and briefly found love with US star of the Bachelor Chad Johnson.

After the emotional win the media personality maintained a low profile and changed her Twitter bio to read “taking a timeout” in 2019.

When her cancer diagnosis was revealed a year later, any animosity inside the Girls Aloud troupe was put aside.

In her final months the band rallied around Sarah and fully supported her decision to write her autobiography, due out in March.

An insider at the time said: “The girls are in touch regularly. Everybody is putting the past behind them – the book is Sarah’s way of doing that for good.

“It feels therapeutic and cathartic to get it all down.”

It no doubt gave Sarah the opportunity to reflect on a life filled with risk, fun and passion. Marilyn would have been proud. 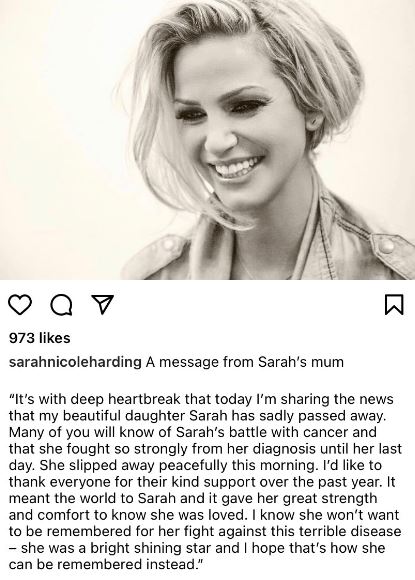 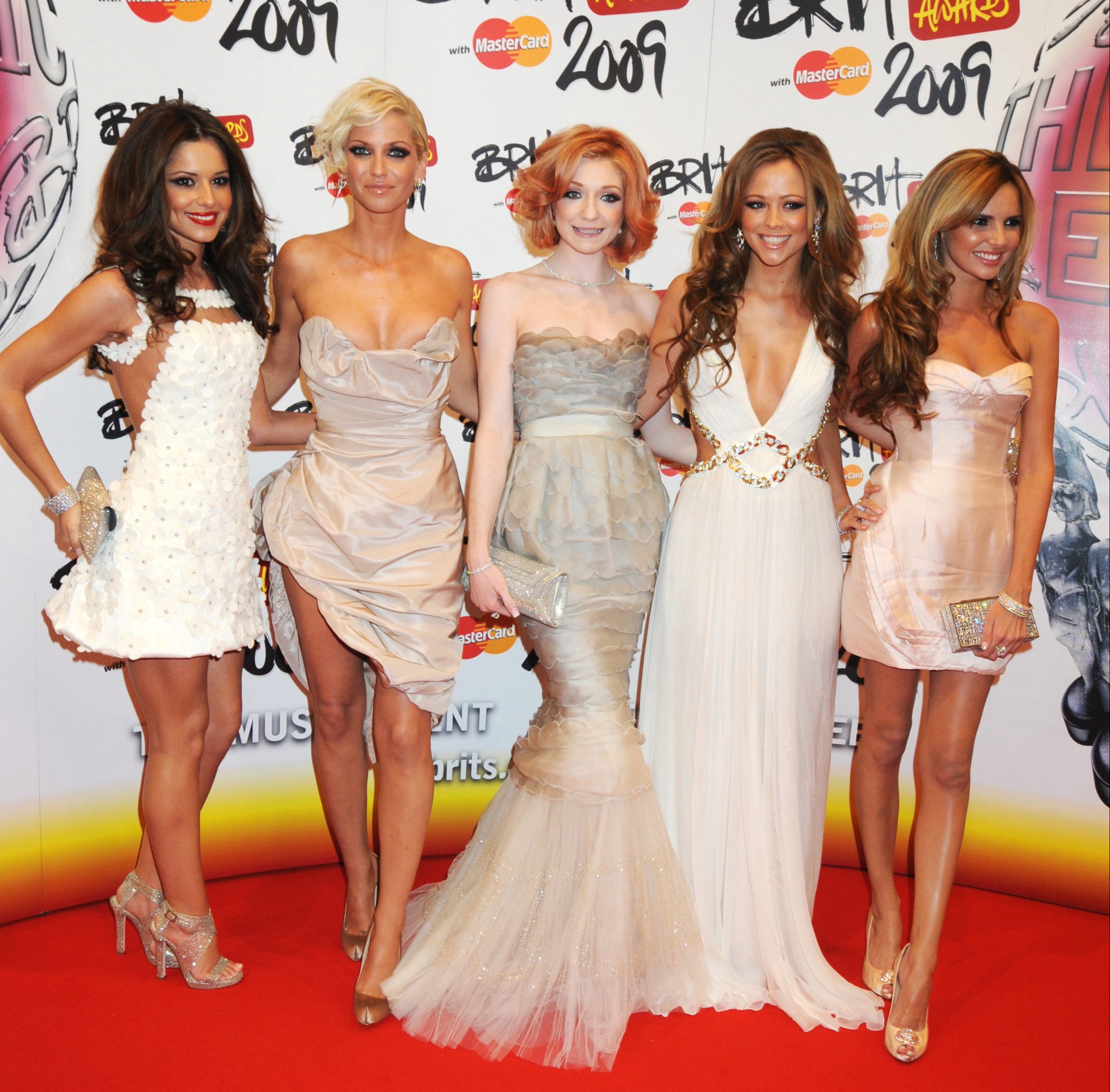