Fame constructs a mythology, turning celebrities into gods until human fallibility muddies the picture, the worshippers fall away and the backlash begins.

Singer Michael Hutchence had been through the whole cycle when he took his life in Sydney in 1997.

His band, INXS, was about to stage a comeback after a year off and he was mired in a depression worsened by his partner Paula Yates’s child custody battles with her former husband, Bob Geldof. And just to confirm the reasons for his casting as a tragic hero, there was the assault he had suffered in Denmark five years previous: an angry taxi driver knocked him to the ground, causing a brain injury that brought on the depression. 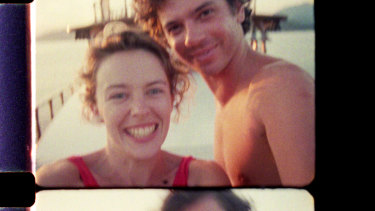 A frame of home movie footage of Michael Hutchence and Kylie Minogue as seen in Mystify.Credit:Madman

Richard Lowenstein, who directed this documentary profile, was a friend and observer of Hutchence’s rise and fall. He worked on INXS’s music videos and in 1986, Hutchence starred in his feature, Dogs in Space.

He has also been given a visual treasure trove to draw from. Like so many performers, Hutchence regarded the camera as his intimate, a feeling he shared with those closest to him. This means he’s virtually telling his own story here. His voice directs the film’s course and his family, friends and lovers flesh it out with their own memories, musings and home movies. 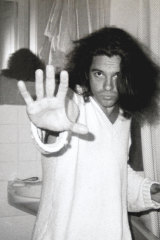 To many, Michael Hutchence appeared the archetypal louche rock god. But, says filmmaker Richard Lowenstein, that was far from the full story.

Dennis – the father of his schoolmates and fellow INXS members, the Farriss brothers – remembers a boy who preferred to be at their place, rather than his own. Others recall a young man who was afraid of being thought pretentious because of his taste for Herman Hesse and Khalil Gibran.

And his first girlfriend, Ananda Braxton-Smith, succinctly sums up the source of his sex appeal: “There is no aphrodisiac like being taken seriously.”

Family photographs explain a lot, as do the recollections of his siblings, Tina and Rhett.

In these snapshots, their parents, Kell and Patricia, present a study in cultivated glamour. He was a businessman based in Hong Kong for a while, she was a former model and from all accounts, their social life left them little time with their children.

After the family’s return to Australia, the marriage broke up and, at one point, Patricia made a breathtaking decision, taking Michael off to Los Angeles for 18 months and leaving his distraught younger brother, Rhett, with a babysitter from Dial-an-Angel.

During their absence, Rhett recalls, he had seven babysitters, the last of whom was taking drugs. Michael was always the chosen one, their older sister, Tina, says, while Rhett was designated the black sheep. And so, an indelible streak of guilt was added to the complexities that shaped Hutchence’s character. 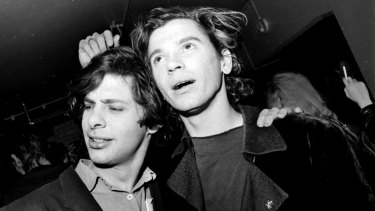 Director Richard Lowenstein, left, with Michael Hutchence in 1986. The pair made many music videos together, plus the feature Dogs in Space.Credit:Madman

He had a sense of humour about himself. The key to his success onstage, he claimed, was his shortsightedness. The audience was just a blur. Hence, he was spared stage fright. But it’s hard to believe. Like Elton John – another shy boy seduced by the siren song of a clamouring audience – he made the stage his home, swaggering bare-chested, microphone in hand, long hair swinging about his face. 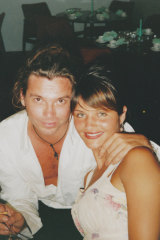 Women liked as well as loved him. His second girlfriend, Michele Bennett, was with him for five years before his non-stop touring schedule forced them apart and they remained friends until the end. Kylie Minogue loved him for his curiosity about the world and the joy he took in watching her experience a new discovery, whether it be in wine, food or art. And it’s clear from their home movies that he and Helena Christensen took great delight in being together.

It was the assault that ended their relationship. The resulting mood swings and rages changed him, she says, and his depression eventually defeated her.

Paula Yates gave him the family he craved but there was a heavy price to pay in the turbulence that surrounded her.

The consensus is that loneliness killed him – a theory borne out by the portrait Lowenstein has drawn so fondly and so well. The film is a tribute to a man who never made his peace with fame and never quite forgave himself for needing it.