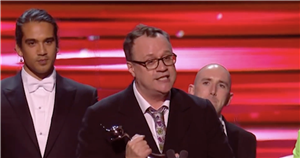 Russell T Davies delivered a powerful acceptance speech after winning a National Television Award for his groundbreaking miniseries, It's A Sin.

Welsh TV producer and screenwriter Russell, 58, took to the stage to accept his award at London's O2, and gave a beautiful speech as he was joined on-stage by the show's cast and crew.

It's A Sin was up against some tough contenders at tonight's OK!-sponsored NTAs, going up against Netflix giant Bridgerton, as well as Des and Normal People.

However, it was the five-part series which followed the lives of an LGBTQ+ group of friends living in London during the 1980s AIDS and HIV epidemic which deservingly took the win.

As he held his award up to the crowd, Russell beamed before giving a moving speech and dedicating his award to those lost to HIV and AIDS.

He said: "I'd just like to say, this is a story about a pandemic in which many people lost their lives.

Olly, who donned a bright green suit for the awards, was urged to "say something!" by Russell, and gave a heartfelt speech to the crowd.

He said: "This show is so brilliant, from everybody in the cast to the crew, in the production, behind the scenes.

"It was the hugest privilege of my life to be a part of it, so thank you to everybody who voted."

It's a Sin, despite being incredibly well-received once aired, was difficult to sell to broadcasters.

It's subject matter of HIV and AIDS saw both BBC One and ITV decline pitches to develop the series and Channel 4 only took it on after their commissioning editor of drama, Lee Mason, fought for it.

The show was then shortened from eight planned episodes to five.

Despite its London setting, It's a Sin was filmed mainly in Manchester with other locations used in Liverpool, Bolton, Eccles, Bangor and Rhos-on-Sea.

The series' executive producers were both Russell and Nicola Shindler, with Phil Collinson hired as the show's producer and Peter Hoar as its director.

The show received critical acclaim for its emotional scenes, writing and depiction of AIDS, and the cast's performances were also highly praised.

After a few weeks on Channel 4's streaming platform, All 4, the whole series was watched more than 6.5 million times, making it All 4's most binge-watched show ever.

For more juicy gossip on your favourite stars, sign up to our daily newsletter here