Jeremy Clarkson was among the original and new Top Gear presenters, as well as other professionals who had been inspired by Sabine Schmitz’s success to pay tribute to the racing legend. When speaking about the first time he met the German professional motor racing driver, Jeremy said she “humiliated” him on the Nurburgring course and “was rude”.

Current presenter of the BBC motor show Freddie Flintoff spoke about “the first time he saw her on television”.

He said: “[It was at the] Nurburgring with Clarkson. It was so good to watch.”

An old clip from the first time Sabine was seen on the show was played and Jeremy was seen explaining: “The Top Gear test track has eight corners. Silverstone – which is a big Grand Prix circuit – has 12 corners. The Nurburgring has 147 corners.

“To help me get around this place, I have a teacher – Sabine Schmitz.”

Jeremy was then seen reminiscing: “The first time she ever took me round the Nurburgring she just humiliated me and was rude.” 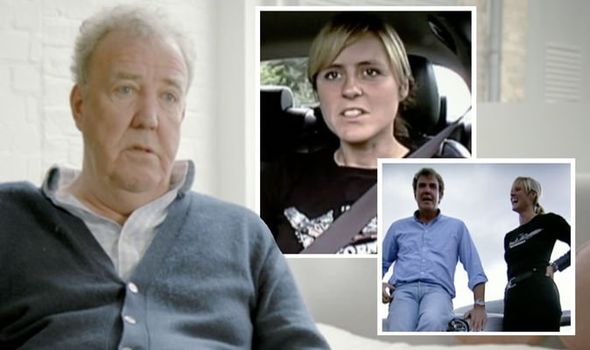 “The first time she ever took me [to the track], she humiliated me and was rude,” Jeremy said.

“She was extremely critical of me, hurtfully so. She had many observations to make about my driving and none of them were kind.”

Jeremy was then seen in a car with Sabine experiencing the Nurburgring for the first time: “I have no idea where this track goes,” he commented.

“It’s a huge corner!” He exclaimed which left Sabine laughing.

“This is my first lap,” Jeremy said in the old clip and Sabine replied: Don’t brake so much.”

Watching the video back, Jeremy added: “She was extremely critical of me. I mean, hurtfully so.”