Karen Gillan is back doing reshoots for Avengers 4, and she’s turning out to be a potential goldmine for plot details.

Following confirmation from Mark Ruffalo that reshoots taking place this month will be used to finish the movie, Gillan teased yesterday (September 12) that there could be a major showdown between Nebula and “daddio” Thanos in the highly anticipated sequel.

And now, she’s potentially revealed a surprising team-up for Nebula in Avengers 4 in the form of fellow Guardians of the Galaxy character Mantis (Pom Klementieff). 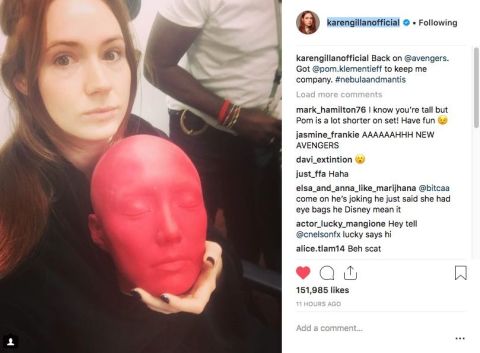 “Back on @avengers. Got @pom.klementieff to keep me company. #nebulaandmantis,” she wrote on Instagram – which could just be Gillan having fun on set, especially given that Mantis was one of the victims of Thanos and his Infinity Snap.

However, the post has led to previous quotes from Gillan resurfacing where she spoke about Nebula having a BFF in Avengers: Infinity War. “I know who her new BFF is and I can’t tell you. I can’t. But I promise you it’s brilliant and unexpected and just so good,” she teased.

Nebula was largely on her own in Avengers: Infinity War until she joined in a fight against Thanos with the Guardians, so could it be that she was actually referring to a team-up with Mantis and it’ll happen in Avengers 4?

Equally likely is that Tony Stark will be Nebula’s new BFF, since the two were the only ones left on Titan after the snap.