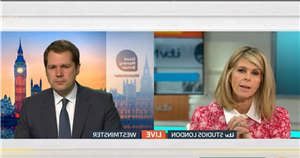 Kate Garraway has shared her feelings about Dominic Cummings' evidence on how the Government handled the coronavirus pandemic and the impact it had on her family, saying those in charge "didn't care enough".

The Good Morning Britain presenter opened up on her reaction to the former adviser's comments about Boris Johnson and key ministers' attitudes to the unfolding crisis, talking about how it made her feel as her family are still dealing with the effects of their decisions.

She said: "Personally, I made a really conscious decision to not go down the road of looking for blame and to forgive because so much could have been different and I feel on a personal level I would have been consumed with anger and frustration about everything. "But I think one of the things that is so hard…and I'm conscious I'm one of the lucky ones, Derek is still with us….it's some of those sentences…

"You want to feel like 24 hours a day people were on it, searching, trying to find out what was going on, and some of those sentences where they said 'actually I like chaos because then they'll all turn to me' smacked of putting self first and I think that's when people will start to question and feel more anger."

In Cummings' testimony, he claimed that the Prime Minister had said "chaos isn’t that bad, chaos means that everyone has to look to me to see who is in charge" and said that health secretary Matt Hancock should have been sacked 15 or 20 times, the UK should have locked down sooner and thouands of lives could have been saved if they had acted differently.

Kate, 54, said: "We had to trust that they were doing their best so you wanted to feel that that was absolutely their focus and of course I'm sure it was, but the delivery and what we heard there just made you feel like, 'oh, come on, please'." Later, Kate told housing secretary Robert Jenrick that the Government had "a trust problem" and shouldn't wait until next year for a public inquiry.

"The problem is you have a trust problem and you've got to do something about it otherwise more lives are going to be lost, thousands more, because nobody knows whether to believe your advice now because they don't know whether you're doing it to save your own jobs, to save the Government's position, or because it's the right advice."