“Kokoloko” is a film about frustration — it’s a woozy and violent product of the same inertia that it so viscerally portrays. Nine years ago, the gifted Mexican filmmaker Gerardo Naranjo seemed poised for a bold career on the international stage. Cartel thriller “Miss Bala” had coalesced the raw energy of the writer-director’s earlier work into a bitter lament for the collateral damage that drug wars have sown across his homeland, and Hollywood was eager to import Naranjo’s talent north of the border and sell it for spare parts.

Denied the resources to develop his own projects, Naranjo was put to work in all of the most obvious places (his recent credits include episodes of “Narcos” and “Fear the Walking Dead”). Prior to “Kokoloko,” he hadn’t made a feature since his “crossover” success in 2011, and Catherine Hardwicke’s risible 2019 remake of “Miss Bala” only added insult to injury.

But the muscular widescreen vision of Naranjo’s breakthrough was only made possible because of the resourcefulness he’d previously honed through scrappy, DIY efforts like “Drama/mex” and “I’m Going to Explode,” and so it was only a matter of time before he decided to do something with all of the creative energy that’s been pent up inside him for the last decade. To that end, perhaps the least surprising thing about “Kokoloko” — a lo-fi piece of work that was actually shot along the craggy shores of the Oaxacan coast in 2016 — is that Naranjo couldn’t wait as long as it seemed.

Shot on super 16mm by a 10-person crew, presented in a claustrophobic Academy ratio that splits the difference between a home movie and a prison cell, and based on a diaphanous plot that Naranjo sketched out on the walls of a Pochutla hotel room, “Kokoloko” is a reflection of aggravated powerlessness on both sides of the camera. It’s an angry, hyper-sexed Greek tragedy sewn together with the porousness of a memory and finished with the lasting power of a daydream (the full meaning of which can be hard to divine for those of us who aren’t intimately familiar with the sociopolitical dynamics of Oaxacan life). There’s a beautiful girl and two boys who want her in their own ways — that much is clear.

Her name is Marisol, Alejandra Herrera plays her with the arresting inscrutability of a house on fire, and she’s caught between the men in her life: Her abusive cousin Mauro (Eduardo Mendizábal) and her erratic older lover, Mundo (“Miss Bala” villain Noé Hernández, whose demonic grin and general devilishness help temper a fiercely unsentimental love triangle that hinges more on lust and ownership than it does on feelings of romance). Marisol might be a victim of Mauro’s constant sexual violence — he insists that “she’s always been my property” like it’s a statement of historical fact —  but she’d never be mistaken for a damsel in distress, nor would Mundo ever be confused for her knight in shining armor. 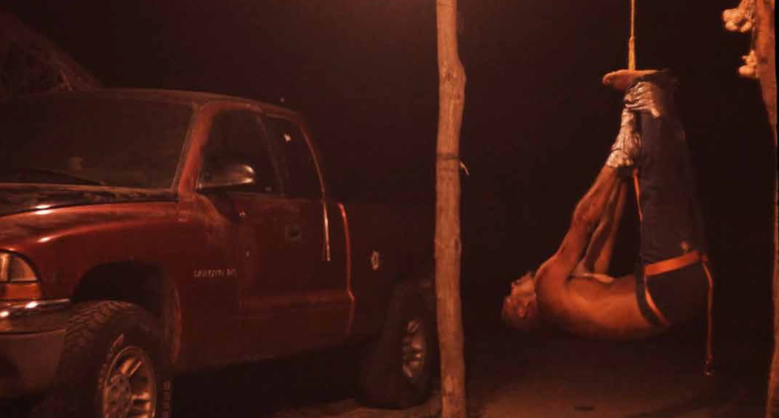 He’s a boorish upstart who wants to join the local guerillas because of the control it would afford him, and Marisol reacts to the pics of machine guns that he sends her over Facebook messenger as if they were sexts (though any Hernández performance also comes with it fair share of flaccid penis). When some local kids casually smack her in the head with a rock and steal her cell phone, we come to understand why Marisol might be turned on by her boyfriend’s weapons. But while Mauro would kill anyone who threatened to free Marisol from his grip, Mundo refuses to fight for her.

So much of this loose-knit film is spent waiting for him to take action, Marisol sunbathing on the jagged rocks along the shore until her whole existence feels as uninhabitable as those sharp cliffs. Naranjo sours the frayed celluloid with occasional snippets of digital imagery until the connective possibilities of modern technology start to underscore how all of these characters are on their own. “Kokoloko” drifts into an epistolary mode once Mundo leaves to try his luck in California, at which point Marisol’s constipated thoughts begin to pool into a voiceover track that holds onto them like hostages… at least until an actual hostage situation arises to put things in perspective.

Less interested in plot than texture, Naranjo’s film mines the majority of its conflict from the friction between hope and opportunity. The world is big and mythic and out there for the taking, but Marisol will never get to be a part of it so long as she’s stuck between two men who are scared of their own small lives (only Mauro takes that out on her in the worst of ways, but it’s telling how Naranjo’s seemingly unsimulated sex scenes often split their attention between Mundo’s performative dominance and Marisol’s genuine pleasure).

“Kokoloko” blurs in and out of focus as it goes along, with the Oaxacan countryside at once both vividly tactile and difficult to map, but little details hint at deeper layers of feeling. There’s something warped and purgatorial to the way Mauro’s beat-up yellow punch-buggy drives back and forth across the same roads as it blares carnivalesque music from the loudspeaker he’s installed in the roof; there’s something both funny and achingly sad to the hot pink mall cheese Britney Spears t-shirt that Marisol wears in one scene like a second-hand souvenir from an alien world.

This elemental and half-formed sketch of a film has no intention of putting a finer point on what kind of freedom she’s hoping to find, but the more heated moments of “Kokoloko” — a super gory machete fight, for example — manage to leave a mark, if only for how they disabuse Mauro and Mundo of the idea that controlling Marisol might assuage their own powerlessness. It’s hard not to feel like Naranjo is struggling to find his own path toward self-expression, but the final scenes of “Kokoloko” at least suggest that he’s happier when left to his own devices.

“Kokoloko” was scheduled to premiere at the 2020 Tribeca Film Festival. It is currently seeking U.S. distribution.