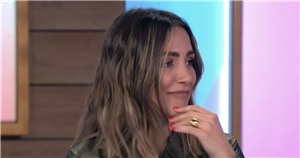 Loose Women star Frankie Bridge has left fans baffled with her story about her friend's "entanglement with a gear stick".

The former I'm A Celebrity star was back on the panel on Thursday (April 7) afternoon alongside Jane Moore, Sunetra Sarker and Nadia Sawalha.

They kicked off the latest edition of the ITV daytime show by talking about gossip.

As the famous foursome shared their views on rumours, Frankie shared her experience with and idle talk.

She said: "It was one of my best friend's hen do a few years ago and we all realised we had this story about her after all these years, this piece of gossip that had gone around the whole of Essex, and we had all heard it individually about her but never told her.

Nadia asked: What was it? Come on."

Frankie continued: "Well, she got into a bit of an entanglement with her gear stick."

After a short pause, she added: "Imagine we're all teenagers and something happened with a gear stick. It's daytime TV so I won't go into it. Use your imagination.

"As teenagers you believe that kind of thing but as we got older we all thought I can't possible be real."

She explained that there was once gossip circulating about her pal and a gear stick.

The mother of two didn't delve into too much information and let her co-stars and viewers use their own imagination as it was "daytime TV".

However, the conversation didn't go down well with views at home as the show took an "unexpected turn".

Taking to Twitter, one fan penned: "Why is Frankie telling us about her friend s****ing her gear stick may I ask?"

Another added: This has taken an unexpected turn! #gearstick #LooseWomen."

While a third social media user said: "Wrap it up Frankie."

A fourth viewer said: "We are all thinking the same thing about the gear stick right…"

It comes just days after Frankie admitted she felt judged for having two c-sections when welcoming her sons, Carter and Parker.

She spoke candidly about giving birth and how there is stigma surrounding the decision to not give birth "the natural way".

The Saturdays singer explained that she wasn't actively against giving birth vaginally, she wasn't desperate for one, explaining that she "wasn't fussed".

Discussing the debate between the two ways available to give birth, she said: "I don't understand it because, in the nicest way possible, I don't care how anyone has their baby as long as they're ok and the baby is okay.

"I had two C-sections and they were elected and we were saying before, I think a lot of people want the experience of a natural birth, but I wasn't fussed."

She was then asked about whether or not she felt judged by the way she gave birth to her two boys.

Frankie replied: "100 per cent and I think the too posh to push thing is a lot to blame for that. People see it as a lazy way out.

"I had a lot of 'oh was it an emergency?' and I think you get it from the minute you're pregnant and for the rest of your life."