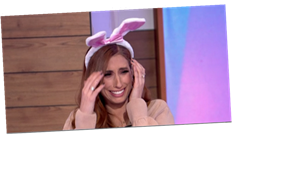 On Friday’s episode of Loose Women, the ladies discussed beauty tips after actress Gwyneth Paltrow advised to only put sunscreen on the tip of your nose and not on other parts of the body.

Talking openly about beauty advice, the women found it very strange that Gwyneth, 48, would advise to only place sunscreen on one part of the body and couldn’t help but take a swipe at her comments.

In a video clip that was aired on the show, Gwyneth Paltrow said: “A lot of people slather in head to toe sunscreen, but I put some kind of on my nose and where the area hits.”

Once the video had finished, Nadia Sawalha replied by saying “wow”.

The presenter continued and said: “Experts have criticised her for applying sunscreen to only where the sun hits, I thought the sun hit everywhere?”

Feeling bemused by it all Stacey Solomon screeched: "It does hit everywhere!”

Nadia then asked the ladies, where they get their most trusted beauty advice from.

Speaking more on the topic, Linda Robson said: “I’ve never really been into beauty tips or anything, I’ve never really even used to moisturise, I don’t think I’ve moisturised my body apart from when I’m on holiday and gets all flakey.”

“But my mum used to use a cream on her face and that’s really about it.”

Stacey chimed in and added a more serious side to the conversation.

The former X Factor contestant and panellist said: “Do you know what, we were all laughing at the top, because you can’t believe it’s true that someone is advising you to do this, but it is actually really dangerous.

“When you think about it, people might watch that and be influenced to just put their sunscreen here, it’s really scary” she added.

Stacey then said she spoke to her friend Caroline who is a skin expert that helped her with her skin.

Stacey explained: “She really helped me with my skin, she just gave her top five tips on what you should do when in the sun.”

“Number one, ignore everything Gwyneth says.”

Fans on Twitter also felt dubious about Gwyneth Paltrow’s advice and left comments on what they had seen.

One viewer wrote: “Gwyneth still a thing. She needs to get back under her rock.”

Another viewer said: “Gwyneth Pratt-row she should be renamed. She's f*****g crazy.”

A third penned: “Movie stars and celebs are out of work during lockdown so having to make up b******t social media videos to stay in the public eye."

Gwyneth Paltrow’s products and advice have often caused controversy. Last year, the star came under fire after she created a candle that smelt ‘like her vagina.’