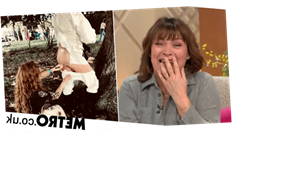 Lorraine Kelly was left red-faced after accidentally confusing a Bridgerton make-up artist with a fluffer on today’s show.

The presenter was chatting to Jonathan Bailey, who plays Viscount Bridgerton in the new Netflix series, when she asked him about a picture of a member of crew ‘painting’ his bottom.

‘Now that’s got to be one of the best jobs in the world,’ Lorraine observed. ‘That’s a wee lady who is, I think they call it fluffing? Is that what they do?’

Jonathan replied: ‘I don’t know what they call it, Lorraine. I think it’s called ice-breaking, isn’t it?’

While fluffing does not necessarily involve touching the actors, it could entail sexual acts such non-penetrative sex.

Lorraine soon realised her ‘fluffer’ mistake and after her interview with Jonathan she addressed the blunder with showbiz correspondent Ross King.

‘You know I was talking to the lovely Jonathan from Bridgerton and I said, you know when he was getting his bottom made up, I said, “is that a fluffer?” and I’ve just realised what a fluffer is and it’s not that,’ she said.

Ross responded: ‘Well done. I didn’t want to point that one out. It’s close-ish, but it’s definitely something different.’

‘My phone is going nuts!’ Lorraine continued, as she cried with laughter. ‘Oh jheeze, I’m sorry.’

Once she had composed herself, she then quickly changed the topic of conversation, but of course, Twitter blew up.

‘Lorraine just asked if a make-up artist on a TV drama was a fluffer? Not sure she realises what a fluffer actually is,’ wrote one.

Echoing a similar sentiment, another penned: ‘Lorraine calling the Bridgerton body painter a fluffer is sending me.’

Lorraine airs weekdays from 9am on ITV.