Dan Johnson was live on location for BBC Breakfast and several times during the show, Dan Walker and Louise Minchin crossed over to him at a holiday park in Shrewsbury where he was speaking to holidaymakers who were braving the cold weather for a little relaxation. Early in the show, the presenters joked with the reporter about borrowing a pair of swimming trunks and going for a dip in the open-air pool and when they returned for an update, Louise was petrified Dan had swapped his work attire for swimming trunks and told her co-star she would walk off set.

Dan was offered a “spare pair of trunks” to take part and he said he would “take up the offer of trunks” but only if he could go in the hot tub.

When the cold pool was suggested, Dan said: “Maybe we will leave that up to public opinion. I’ll let you guys decide.”

“Dan!” Louise exclaimed from the studio. “You know what the decision is going to be, can you shout out and ask what the temperature in the cold pool is?”

The answer was 7.9 degrees celsius, to which Louise responded: “Perfect day for a swim Dan, it’s decided.” 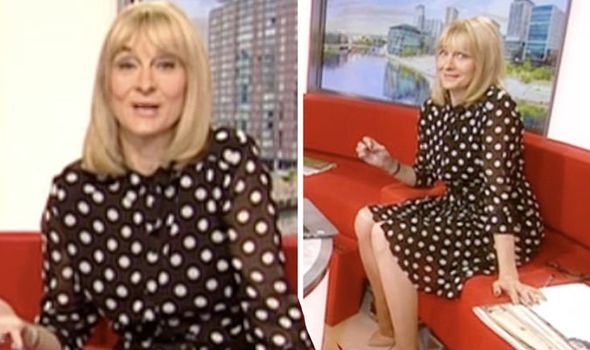 “Dan, my recommendation to you would be,” Dan from the studio interjected. “If they’re lost property trunks, don’t go anywhere near them, okay?”

“It’s like school P.E all over again,” the reporter who was at the pool commented.

BBC Breakfast viewers saw the host add: “Exactly! I learnt that lesson many years ago, so I avoid them like the plague.”

Later on in the show, Louise began: “Along with pubs, gyms and hairdressers, holiday parks and campsites across England have also been welcoming back visitors for the first time this year.” 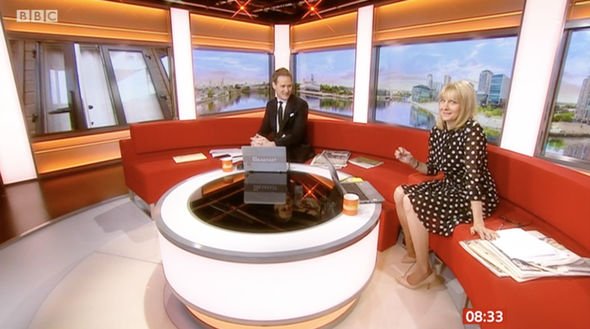 “Now, we’re handing to Dan Johnson with a slight slice trepidation, because we mentioned earlier, there are some trunks available if Dan want to go into the pool and he seems to be behind the curtain somewhere. So Dan, what’s happening?” Dan asked.

The reporter pulled back the curtains and exclaimed: “Morning, morning! I’m definitely fully clothed this morning, because it is freezing in this part of Shropshire but a beautiful morning, a lovely night to stay away.

“Some might be waking up and wondering what they’ve let themselves in for, but it has been a really beautiful morning here, because people have been able to get out and about once again and they’ve been taking advantage of it in every corner of England.”

After speaking to some visitors at the holiday park, Dan continued: “I’m just going to take you round and show you the hot tub, there was a threat earlier, some people think they ought to end up with me in the pool – I’m not sure anyone is ready for that at breakfast time. 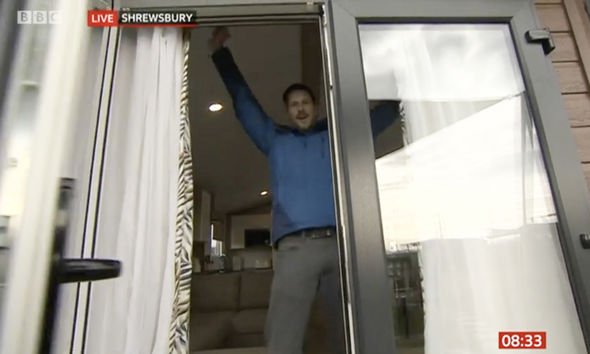 “But the hot tub has been warmed up this morning – that’s lovely! That could convince me.”

Back in the studio, Dan added: “I should say earlier, when you were behind the curtain, Louise said when you unveiled yourself and you were thankfully fully clothed, I think if you had been in your trunks, Louise said she was going to walk off set – so well played.”

After fumbling for a response, Louise finally said: “In support of you Dan!”

Dan in the studio then realised how his remark may have been interpreted and clarified: “I was trying to bring everyone together!” 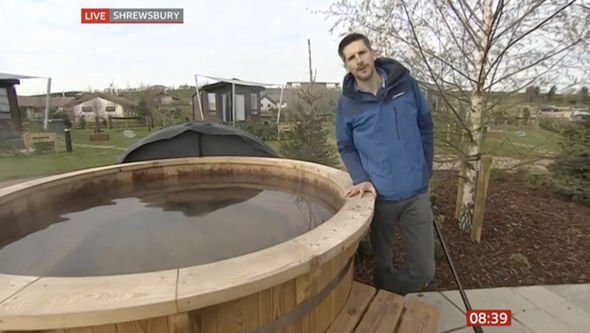 Fellow BBC Breakfast colleague, Nina Warhurst who usually presents the business segments on the show, took to Twitter when she realised a subtitle error from the segment.

“I’ll take you up on the offer of the drugs if I can go in the hot tub,” it read incorrectly.

Alongside the screenshot, Nina tweeted: “Honestly you take *one* day for a late start & @DanJohnsonNews bagsies this OB….”

Dan Walker retweeted it, adding: “I was sure @DanJohnsonNews said TRUNKS!!! #SubtitleCarnage.”

BBC Breakfast airs every day at 6am on BBC One.