Marvel movies will no longer be released on Netflix, starting with Captain Marvel

Netflix has always been the streaming home for Disney movies in the US, but all that is going to change from next year.

With Disney’s shiny new streaming service on the way, it’s now emerged via The New York Times that the final Marvel film to get its streaming release on Netflix will be Ant-Man and the Wasp, and the first to debut exclusively for Disney’s platform will be Captain Marvel in late 2019.

After that, all of the films that Disney releases in cinemas – including all of its animations, plus the Star Wars series – will eventually premiere on the Disney streamer instead of Netflix.

So, given Disney is also about to acquire 21st Century Fox and its massive movie and TV library, this new streaming service could be Netflix’s biggest rival yet.

Still, a Disney spokeswoman reiterated that there are currently no plans to transfer Marvel’s TV shows from Netflix to Disney’s platform, so shows like Jessica Jones and Luke Cage aren’t going anywhere just yet.

Captain Marvel, out next March, will be the first of three MCU movies released in 2019, followed by Avengers 4 in May and and Spider-Man: Far From Home in July. All of these will only be available to stream via Disney – talk about a good time to hand Netflix a blow. 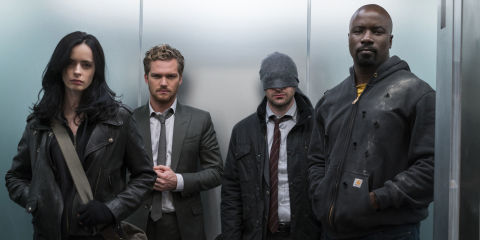 That’s not to mention Disney’s own major movies in the works, like the Beyoncé-starring Lion King out next July.

And while Disney’s current Marvel shows are staying put on Netflix, the studio is working on its own live-action Marvel series, plus a Star Wars TV series from Jon Favreau and High School Musical, Monsters, Inc and Muppets shows.