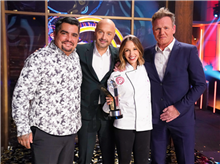 The Season 11 finale of Fox franchise MasterChef was on the menu tonight, as hosts and judges Gordon Ramsay, Aarón Sánchez, and Joe Bastianich tasted, toasted, and taunted their way through the show talent’s best dishes.

Abetted by guest stars and legends including Emeril Lagasse, Paula Deen, Roy Choi, Nancy Silverton and Morimoto, the season focused on 15 of the best home cooks in America. The finals came down to three female cooks, Autumn Moretti, Kelsey Murphy, and Suu Khin, who were joined by guest judge and chefs Curtis Stone and Michael Cimarusti.

**** SPOILER ALERT: Do Not Read Past This Line If You Haven’t See Tonight’s Show

“Winning MasterChef means everything!,” Murphy said in a statement. “It is a culmination of a lot of hard work, sacrifice, and persistence. I am so proud of what I was able to accomplish throughout the season and have a new confidence in myself and my skills as a chef. I plan to hit the ground running and start making waves in the culinary world.  I’m working on a few projects with MasterChef that I can’t wait to announce soon! So many exciting things to come!”

The show next turns to its MasterChef Live! roadshow, featuring past winners and runners-up in a kitchen tour de force.

Meanwhile, the televised version has already been renewed for a 12th season. In addition to MasterChef, host Gordon Ramsay also hosts and executive-produces Hell’s Kitchen, Masterchef Junior and Gordon Ramsay’s 24 Hours to Hell and Back, as well as specials, including 2021’s Gordon Ramsay’s American Road Trip.