Tonight’s Countryfile focussed on the harvest season and how farms have been affected this year by the rainy weather and coronavirus pandemic. While Adam Henson was on his farm near the Cotswolds, Matt Baker was in North Yorkshire on a strawberry farm. As he admired the speed at which the berries were picked and packed up, Matt decided to get involved.

Matt told viewers at home: “The pace is incredible, taking no more than 30 minutes to get the strawberries from the poly-tunnels into the chill store and then to the pack house where another team will pack and label roughly 190 punnets a minute.

“Back in 2016 in a strawberry field in Kent, I lost a picking race and having spent the day here at Annabel’s farm, I want to see if I’ve improved.

“But I’m going up against Deanna, who has been known to pick up to 40kg in an hour.”

Matt was seen meeting Deanna, socially-distanced of course, before they began their race down the poly-tunnel. 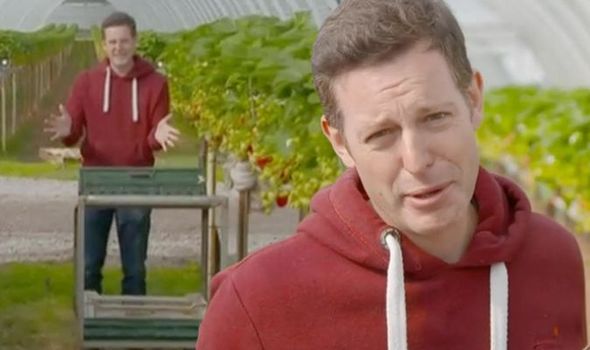 “Right Deanna, I’ve heard a lot about your skills, I’m in the presence of greatness,” Matt said greeting his competitor.

“So let’s do this. It’s the first to fill four punnets.”

Deanna was more than up for the challenge as she exclaimed: “Okay let’s go,” and immediately began picking berries.

She was incredibly quick as she disappeared down the poly-tunnel picking the berries much faster than Matt. 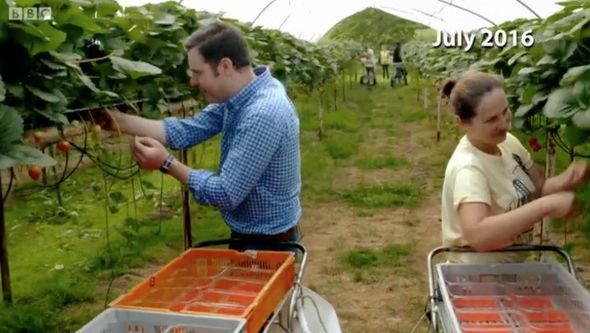 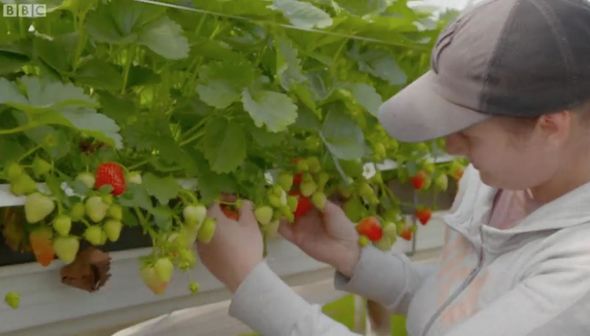 “Come on Matt, you have to do much better if you want to be like me,” Deanna scolding him for his slow pace.

As viewers watched the pair compete to find out who could pick the berries quickest, Matt explained: “It’s amazing to see how hard the team work to keep up with your insatiable appetite for strawberries.”

Meanwhile, Deanna was just finishing her third box of berries while Matt was still way behind.

He claimed his equipment was holding him up as he insisted his trolley was moving too slowly.

“It needs oiling,” he moaned as Deanna shouted: “I’m finished!”

As he accepted his defeat, Matt apologised to viewers at home if they picked up the punnet he had packed.

He noted there were some “short stalks” and “white shoulders” on the strawberries he had packed up.

Fans were shocked to find Matt had not got the “checked shirt” memo, which is usually the uniform of Countryfile’s meteorologists.

“What on earth is that weather shirt….!!!!? #countryfile,” one viewer posted on Twitter while another added: “No check shirt klaxon!….. #countryfile.”

Countryfile continues Sunday on BBC One at 6pm. Sacha Baron Cohen Donates $100,000 to Oklahoma Community on ‘Borat 2’ Babysitter’s Behalf
We and our partners use cookies on this site to improve our service, perform analytics, personalize advertising, measure advertising performance, and remember website preferences.Ok