This Morning viewers were left fuming after an adorable elderly couple were cut off in favour of the weather.

Des has been doing make-up for his wife, Mona Manahan, since her eyesight began to fail, which caused the honourable gent to go viral. It all began when the 83-year-old critiqued a professional make-up artist his wife visited. 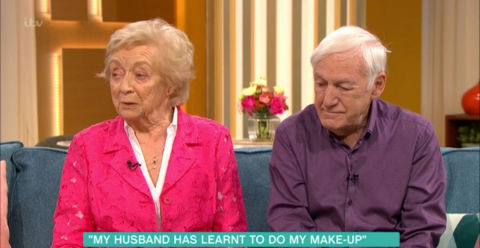 The beautician, Rosie, then handed him the brush, so Des took over and began beautifying his 82-year-old wife. It was then that one of her colleagues took a photo, which later went viral. Des went on to have make-up lessons to keep up the practice for his wife every single day.

Towards the end of the chat, the couple were unceremoniously cut off while Eamonn Holmes was speaking, all in favour of the weather – which caused outrage on social media.

“They cut the sweet old dear off. Rude Bastards,” wrote one Twitter user.

Thankfully the show did return to lovely Mona and Des after the break, where they gifted the couple a bunch of make-up goodies.

Speaking to Eamonn and Ruth Langsford about going viral, Des said: “I thought [viral] was a medical condition. We don’t have Facebook or whatever those other things are.”

Mona, who only has 50% of her sight left in one eye, explained: “When I met Des, he hated people wearing a lot of heavy make-up – I kind of followed along. I did what I could when I was going out. Then suddenly I had this transformation, if you like, and I absolutely loved it.”

“For me, it’s just natural, I feel that any husband or wife of our age…” began Des, before bursting into tears.

Most. Adorable. Couple. Ever.

This Morning continues weekdays from 10.30am.