Naga Munchetty shut down by Charlie Stayt as he rejects co-star’s request: ‘No!’

Naga, 45, and Charlie, 58, were back on hand to host another weekday instalment of BBC Breakfast, discussing all the big stories making the headlines. One such article from the newspapers which caught their eye was from the continuing coverage of the Tour de France, with cyclists taking to the skies by having their bikes attached to cable cars. However, the latter BBC presenter didn’t seem as enthused as his co-host and Mike Bushell, 54, as they expressed their desire to take on the jaw-dropping venture.

After the former Strictly Come Dancing star had given a round-up of the news coming from the sporting arena, Naga asked him to take a look at the image of the cyclists taking to the skies.

“Can you do me a favour – did you see this picture? Can you explain it next time? We haven’t got time now,” the host enquired.

With Mike the other side of the studio, the presenter explained: “The cyclists are getting a lift underneath these pods.”

Turning to Charlie, the keen golfer told their co-star they were unsure whether the snapshots were real or not.

“It cannot be the cyclists,” Stayt declared, adding it was “too dangerous” for the sportspeople to be put in such a situation. 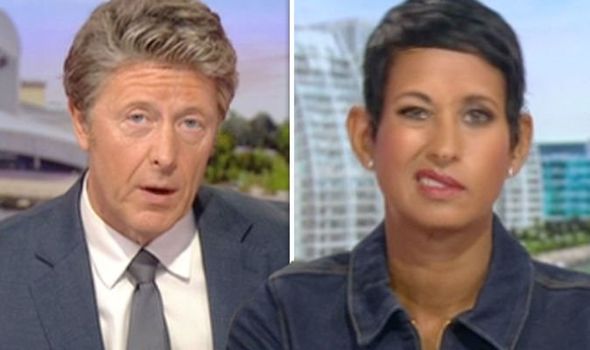 “I guess it’s one of their team taking it up,” Mike replied but assured his co-stars he would take a better look later on in the morning.

“I’d like a go at that, to be honest. It looks great,” the sports journalist replied, to which Naga agreed.

“We’ll drag Charlie along, hey,” she quipped and when she asked if her co-host was “up for it” he gave a rather blunt reply.

“No,” he told his co-star, shutting down her request as he saw the venture as a “dangerous” one to take part in.