Naga took to the BBC Breakfast sofa alongside co-host Charlie Stayt for Friday’s episode as the pair brought BBC One viewers the latest news headlines. As well as the topical issues dominating the newspapers, the two discussed Storm Alex’s impact earlier this month also heard from weather reporter Matt, who had rather glum news in regards to weather for the weekend. However, when Naga probed him on just how much rain had hit the country as a result of the storm, she was left interrupting him to snap: “That wasn’t an explanation.”

The debate kicked off when Charlie shared with viewers how October 3 was the wettest day ever, since records began.

“There’s been plenty of rain this month,” he told BBC Breakfast viewers. “But Saturday, October 3 was the wettest on record since records began in 1891.

“According to researchers, it was enough rain to fill Loch Ness, the largest lake by volume in the country.” 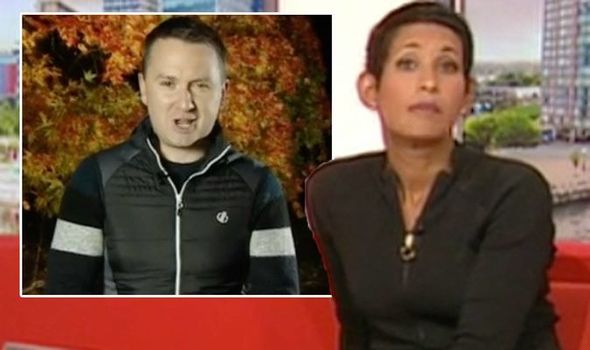 Naga couldn’t quite believe just how much rainfall there was as she looked puzzled at her co-host.

“So you had loads of number there, right?” she quizzed. “But the thing that struck me is enough rain to fill Loch Ness?”

Charlie agreed: “That does seem extraordinary, the more you think about that, the harder it is to make any sense of it.”

Naga then cut to weather reporter Matt to “make sense of it”, but he wasn’t any clearer.

“You’ll make even Charlie understand it. So you’re at Westonbirt National Arbiritum, what do you make of that then?

“Can you actually fathom it? Enough rain to fill Loch Ness?”

Matt rather bluntly replied: “It’s a lot of rain, there you go, simply put, to be honest. This one day -“

However, Naga was far from satisfied with Matt’s breakdown of the news and quickly interrupted.

She snapped: “That wasn’t an explanation, Matt!”