Nicolas Cage's 'Prisoners of the Ghostland' Picked Up by RLJE Films 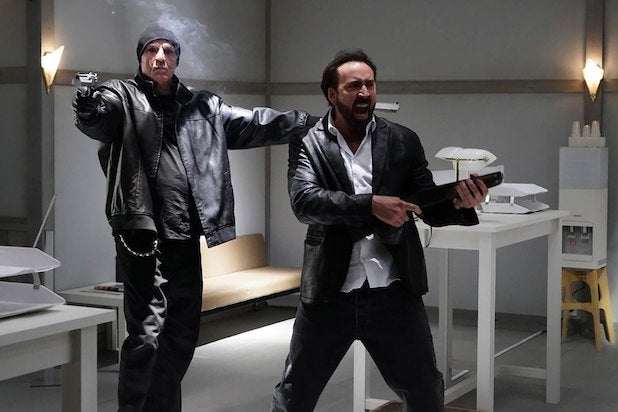 RLJE Films has acquired the U.S. rights to “Prisoners of the Ghostland,” an action film starring Nicolas Cage that is set to premiere at the Sundance Film Festival later this week.

Japanese auteur Sion Sono (“Why Don’t You Play In Hell”) directs “Prisoners of the Ghostland,” which is described as a mashup between Westerns, samurai films, action movies and post-apocalyptic thrillers. And RLJE Films is the same team that released Cage’s “Color Out of Space” and “Mandy,” both of which were similarly indie, art house movies that have become cult favorites. No release date has been set for the latest film.

“Prisoners of the Ghostland” also stars Sofia Boutella, Nick Cassavetes, Bill Moseley, Tak Sakaguchi and Yuzuka Nakaya.  The film is set in the treacherous frontier city of Samurai Town where a ruthless bank robber (Cage) is sprung from jail by the wealthy warlord The Governor (Moseley), whose adopted granddaughter Bernice (Boutella) has gone missing. The Governor offers the prisoner his freedom in exchange for retrieving the runaway. Cage’s character however is strapped into a leather suit that will self-destruct within three days if he fails to retrieve the young woman and find his own path to redemption.

“Prisoners of the Ghostland” is presented by Patriot Pictures and was fully financed by Michael Mendelsohn’s Union Patriot Capital Management. XYZ Films produced, and is handling worldwide sales, with plans to introduce the film to buyers after Sundance.

“We’re excited to once again work with Nicolas Cage on a highly anticipated film directed by the celebrated Japanese filmmaker Sion Sono,” Mark Ward, chief acquisitions officer of RLJE Films, said in a statement. “Following the success of ‘Mandy’ and ‘Color Out of Space,’ ‘Prisoners of the Ghostland’ is already receiving great buzz and we cannot wait for audiences to see it at Sundance.”

Ward and Jess DeLeo from RLJE Films negotiated the deal with Bolotin from XYZ Films on behalf of the filmmakers.