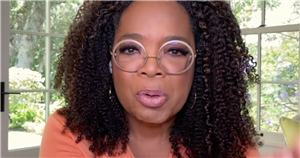 Oprah Winfrey believes that, following her interview with Prince Harry and Meghan Markle, the world now understands why they left the UK.

After the release of the new Prince Harry and Oprah Winfrey documentary series, The Me You Can’t See on Apple+, on Friday, Oprah made an appearance on the Today show to speak out against criticism of Harry.

She said: "You know, I ask for privacy, and I'm talking all the time.

"So I think being able to have a life that you are not intruded upon by photographers, or people flying overhead, or invading your life, is what every person wants and deserves — to not to be intruded and invaded upon.

Criticism thrown at the Prince leaned towards the belief that it is contradictory to ask for privacy while also releasing a personal documentary series on a popular streaming platform.

Oprah suggested that their request for privacy isn’t about remaining quiet, but stopping the public interest into the parts of their lives they wish to keep to themselves.

The legendary TV host was then asked whether Harry and Meghan had any regrets about their interview with her that brought so much criticism in the recent past.

Oprah said: "They have not shared any regrets with me.

"I understood what had happened to them, and I wanted the rest of the world to come away being able to answer the question, 'Why did they leave?' And I think by the time that interview was done, people understood."

The documentary series tackles mental health and goes into detail about Harry's personal past and pains through his upbringing.

Twitter users such as Pier Morgan recently said about Harry: “Oh FFS. Is there no end to Prince Privacy's victimhood tour? Constantly abusing his family, knowing they can't respond, is so pathetic and cowardly. Man up, Harry – and shut up.”

The new documentary, The Me You Can't See, sees Harry and other celebrities open up about extremely personal experiences.

Harry accused his family of "total neglect" when it came to him asking them for help in the past.

He also said that he and Meghan "spent four years trying to make it work" as acting members of the Royal Family, but when they asked for help with Meghan's mental health struggles, they were "met with total silence".

Harry went on: "That feeling of being trapped within the family, there was no option to leave."

The Me You Can't See is now available streaming on Apple+