Orlando Bloom is feeling grateful for his health and body.

The 44-year-old actor took to Instagram on Friday to reflect on “narrowly escaping death” after suffering a fall and breaking his vertebrae in 1998.

“That’s me in my back brace circa 1998 about 3 months after I fell 3 floors and crushed my spine, narrowly escaping death and paralysis,” he wrote alongside an old photo of himself riding a bike and wearing a brace. “Grateful everyday for my limbs that allow me to push my limits and live life on my edge (safer now🙏).”

The post also includes a more recent photo of him cycling in the mountains.

Bloom’s fiancée, Katy Perry, commented on the post, writing, “I love you.” Miranda Kerr, the actor’s ex-wife, also wrote, “So proud of you ❤️.” 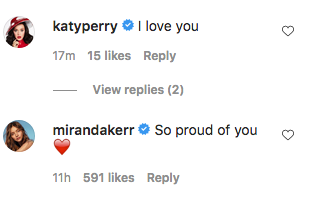 The Lord of the Rings star previously opened up about his accident, telling GQ in 2005 that he was climbing a rooftop terrace with friends when a drainpipe he scaled collapsed and fell three stories.

“Until then, I didn’t have a healthy appreciation for life and death – that we’re not invincible,” Bloom told the magazine. “And for four days, I faced the idea of living in a wheelchair for the rest of my life. I went to some dark places in my mind. I realized, I’m either going to walk again or I’m not.”

“But that accident has informed everything in my life,” he continued. “Until you’re close to losing it, you don’t realize. I used to ride motorbikes and drive cars like everything was a racetrack; it was ridiculous. It wasn’t because I thought it was cool; it was just because I loved living on the edge. But I’ve chilled.”

Eighteen months after recovering, he landed the life-changing role of Legolas in the Lord of the Rings franchise, which led to being cast in Pirates of the Caribbean and many other iconic roles.

These days, when he’s not shooting the second season of Carnival Row, he’s skinny dipping in lakes. The actor recently shared a snap where he stands looking out onto the water with his back to the camera while totally naked. The actor put a peach emoji over his bottom to censor the pic, tagging Perry on top of the emoji.

And just this week, Perry and Bloom also celebrated their daughter Daisy Dove’s first birthday. For more on Bloom, see below.