Penelope Fitzgerald's divided village loses some bite in The Bookshop

One of the British film and television industry's most popular exports is nostalgia and its centrepiece is the English village. It's a place teeming with full-blown eccentrics, many of them testy in the extreme, but somehow a sense of community manages to embrace them all. In a crisis, everybody pitches in and after the confusion subsides, all ends happily. 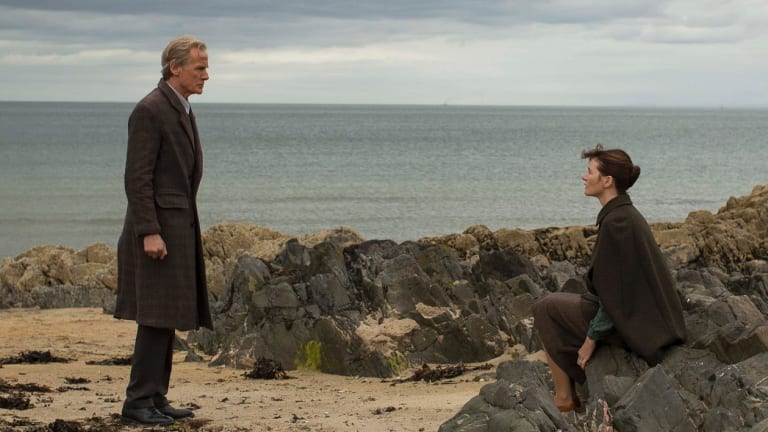 Bill Nighy and Emily Mortimer become allies in The Bookshop.

Spanish writer-director Isabel Coixet takes on the job here and quite a few of Fitzgerald's sharp edges have been planed away, along with the wit that makes her such fun to read. Nonetheless, Coixet has no trouble with her theme, which is centred on the power of ideas and the books that contain them. And the village's eccentrics have retained their capacity to amuse as they discover that they do have time for reading, after all. Bill Nighy is one of them, shambling artfully through the action as the reclusive Edmund Brundish, Florence's best customer. She delivers his purchases personally so that they can enjoy the kind of bookish conversations they have both been missing. When she's trying to make up her mind if she should dare to order in copies of Nabokov's Lolita, he's the one she turns to for advice.

Fitzgerald describes Florence as "small, wispy and wiry, somewhat insignificant from the front view and totally so from the back". This isn't quite the way Coixet sees her, having cast the seriously good-looking Emily Mortimer in the part. While the opening scenes have her turning up to Violet's party in an unflattering dress, insignificant is not the word that comes to mind. But what can you say? It is a movie, after all.

The story is told in flashback and there are bursts of voice-over spoken by a character who remains unidentified until the end. The pace is gentle and the wind-blown East Anglian beaches, where Florence likes to walk, are in harmony with the film's emotional climate, which is more melancholy than the novel's. Florence is a widow and her life is still coloured by the loss of her husband, who shared her love of books. Mr Brundish, too, is in retreat from past disappointments and in the bond that forms between them, there's a hint of regret and of lost opportunity, as if springing from the wish that time had arranged things differently by assigning them to the same generation.

Violet is loathed by each of them. The perennially elegant Clarkson, seen recently in The Party as Kristin Scott Thomas' loyal but waspish friend, can play any role as long as it allows for a touch of asperity and Violet is her most venomous creation so far. Extravagantly lipsticked and powdered, she fancies that her most useful asset lies in her charm. Her snaky acolyte, Milo North (James Lance), an ex-BBC broadcaster fallen on hard times and the film's most devious creation, certainly thinks so. But Violet's greatest asset turns out to be her mastery of petty bureaucracy. So English village life takes a bit of a beating here. Nonetheless, the power of books and those who read them prevail in the end.