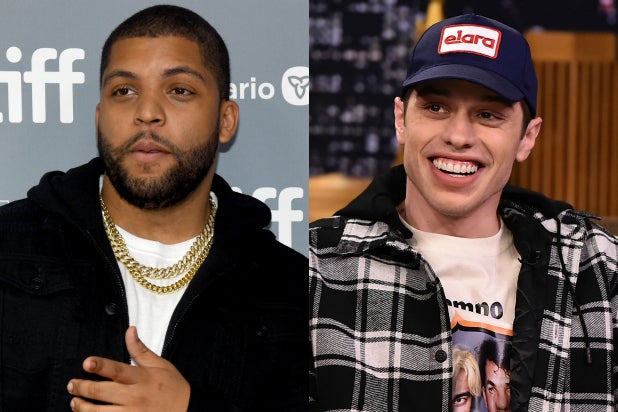 Pete Davidson and O’Shea Jackson Jr. are teaming up to sell some sneakers.

The two burgeoning stars are set to appear side-by-side in a new dramatic comedy for STXfilms, set in the high-stakes world of after-market sneakers, one of the fastest growing areas of in-demand streetwear.

“American Sole” follows two twenty-somethings (Davidson and Jackson) with mountains of college debt who use the fast cash of after-market sneaker reselling to achieve their American dream. But when their startup runs out of cash and a shady investor is their only way out, the dream quickly becomes a nightmare.

The film will be written and directed by Ian Edelman (“How to Make It in America”) and produced by Kevin Hart through his HartBeat production company. NBA All-Star Chris Paul will also produce through his Oh Dipp!!! Productions banner along with Jake Stein (Netflix’s “The After Party”) through his Scondo Productions label. American Sole marks Paul’s first feature film as producer.

“American Sole is a story about the highly exciting, very profitable sneaker industry and the secondary sneaker market,” Paul said in a statement. “With my own personal passion for sneakers and the culture that drives it,  I’m excited to be a part of telling this entertaining story.”

The sneaker resale market is one of the fastest-growing segments of the fashion industry, having reached $2 billion, a figure that is expected to triple by 2025. With brands manufacturing rare models in extremely limited runs, some of the most highly sought-after kicks have fans shelling out as much as $50,000 for a prized collectible pair.  In August, 2019, Stadium Goods partnered with Christie’s to auction the Air Jordan 1 High “‘Shattered Backboard’ Origin Story” for $615,000, the record for the most expensive shoe ever sold.

“We’re always looking for ways to tap into the zeitgeist, and anyone who’s paying attention to popular culture around the world knows that this particular trend authentically marries the worlds of fashion, music, sports and business and this project has garnered genuine interest in all of those key verticals,” STXfilms Chairman Adam Fogelson said in a statement. “We believe we have assembled a dream team of filmmakers, and with the cast led by Pete, we couldn’t ask for a more exciting fit for STXfilms.”

Davidson recently starred in Judd Apatow’s, “The King of Staten Island,” which Universal released on demand during the pandemic. Prior to that he starred in Jason Orley’s Hulu original film, “Big Time Adolescence.” He is now set to star in James Gunn’s “The Suicide Squad,” which is set to be released in 2021, and he his and his SNL castmate Colin Jost will headline Universal Pictures’ upcoming wedding comedy “Worst Man.”

O’Shea Jackson, Jr. will next star in the Apple+ series “Swagger,” executive produced by Kevin Durant and inspired by his experiences in AAU basketball. Jackson most recently appeared in “Just Mercy” opposite Michael B. Jordan and Jamie Foxx, “Godzilla: King of the Monsters,” and “Long Shot.” He made his feature film debut playing his father, Ice Cube, in the hit film “Straight Outta Compton.”