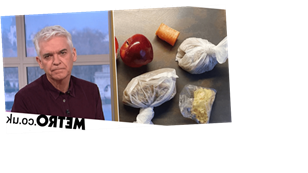 This Morning’s Phillip Schofield was not impressed by the pictures of shameful free food parcels sent to parents struggling to feed their children and expressed his shock on today’s show.

The presenter was joined by co-host Holly Willoughby on the programme when he criticised the provisions, which were meant to last for 10 days.

As photos of some of the packages that had been sent out were projected onto the screen, Phil exclaimed: ‘Look at the size of that piece of carrot there. It’s just extraordinary.

‘Half a pepper, a tiny piece of carrot, what the hell is that?’

Phil also suggested it would be better for the government to send out vouchers to parents instead, so they can go to the shops themselves and buy their groceries.

Elsewhere, Andrew Neil said the food parcels were a ‘failure of government’ and condemned their meagre contents.

‘It’s clear to me the people sending out these parcels are doing so with the knowledge they won’t be for their children because nobody would send that out to their own children,’ he told Holly and Phil.

‘There’s no way, if this was going to middle-class homes, that we’d be sending out parcels like this.’

He added: ‘It’s another failure of government.’

Since today’s segment on This Morning, the Education Secretary has said parents will be able to receive food vouchers from next week.

Gavin Williamson told the education committee in the House of Commons the £15 voucher scheme will return next week, amid the food parcel scandal.

It will give parents £15 vouchers which will be used in supermarkets to buy a week’s worth of food for their child.