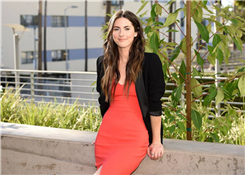 EXCLUSIVE: Rachel Bonnetta on Friday announced that she has left Fox Sports after five years, teasing “a new chapter” she was “beyond excited for.”

She would not elaborate but according to sources, Bonnetta will join the NFL Network. There, she would have a role on the network’s Sunday pregame show Gameday Morning and a presence at such major NFL events as Super Bowl week and NFL Honors, I hear. She also is expected to become a leading sports betting talent on existing shows and launch a sports and entertainment-focused podcast on the NFL’s upcoming podcast network with iHeart, sources said. A rep for NFL Network declined comment.

During her five-year tenure at Fox Sports, Bonnetta hosted the daily gambling show Fox Bet Live on FS1. (In her post announcing her departure, she also teased that she “will continue to be a part of the family”, with an announcement about that coming in a few months. (You can see the post below.)

Bonnetta also serves as the sideline reporter on the A&E competition series, America’s Top Dog. Additionally, she is attached to star in and executive produce a comedy series in the works at TBS loosely-based on her real life in the sports broadcasting world.