“Everything in the city is better, everyone sticks to themselves, nobody fucks with anybody else,” says former turf rival Jackie (Elva Guerra) to Elora (Devery Jacobs) in the Season 1 finale of Reservation Dogs as the duo head to a new life in California. “Sounds dope,” replies Elora with an almost total lack of conviction.

Renewed earlier this month for a second season on FX on Hulu, the Sterlin Harjo created and Taika Waititi executive produced Indigenous dramady certainly left a number of cliffhangers of sorts out there in its Migizi Pensoneau penned “Satvrday” finale – and not just did Uncle Brownie (Gary Farmer) really beat off a tornado hitting Okmulgee, Oklahoma

What’s next for Elora down the road? What happens to Bear (D’Pharaoh Woon-A-Tai), Cheese (Lane Factor) and Willie Jack (Paulina Alexis) after the trio stayed behind and left the Golden State as a mere dream?

Coming off a “proud’ presenting stint at the Emmys last night with Reservation Dogs core cast, Harjo spoke with me about the barrier breaking season that was on the Indigenous cast, written and directed show, the season to come and telling stories that so often have been ignored.

DEADLINE: So, do Elora and Jackie really head off to California? It looked pretty tense in that car…

HARJO: (LAUGHS) Well, it would be a giant spoiler alert if I told you what happens right after we cut from their car and that will be the opening of Season 2.

DEADLINE: Yes, it would, but with a cliffhanger like that, it seems pretty clear you know where you want Season 2 to go, figuratively and literally.

HARJO: I know where I want Season 2 to end.

HARJO: Yeah. I know where I want Season 2 to end and I think with anything you have to have room to learn things, right? Because you don’t know what you got when you’re first making it, you know. You write these parts and you cast them and then all of a sudden, you’re looking at the edit and you’re like man, I want to watch Wes Studi longer, you know what, like I want to watch more Uncle Brownie. So, sometimes these things shift and it’s like well, what’s Auntie B doing?

Sometimes these things shift and expand and I think it’s good to have a sort of loose idea of where you’re going. It’ll be really nice to reflect on this first season and you know, take that knowledge and go into Season 2 and expand.

DEADLINE: Looking back now, what are your initial thoughts on the show you created and its impact?

HARJO: Obviously there’s gratification and I feel really good about what we did and we approached it with such love, and I’m really happy from the response. I don’t think that I anticipated kind of how popular it could be and how proud people are of it.

I don’t know, I mean, that was a strange thing that

I don’t think you can ever like plan for something like that you know? All I know is we attempted to make a show that we felt was different, not just because of the subject matter but how we told the story.

HARJO: Well, I think shows like Atlanta that came before it allowed us to kind of laid down the tracks for us to do that and you know, we were able to play with the way you let a TV show unfold.

When we were doing it and when we were thinking about doing it, it felt good but until we got the response we didn’t know. It was kind of like, I hope this works, you know? And the response has been great and you know.

DEADLINE: What does your best mean to you in that context?

HARJO: Over the next season I want to try my best honor the way in which we tried to do the first season and hold onto that and the tone and also the intent. You know, it’s entertainment and it’s funny but also some of my favorite shows or movies, they’re funny but there is this line of drama or tragedy throughout that I think it keeps people coming back for different reasons.

DEADLINE: In the development of Reservation Dogs that occurred as you were creating it and then producing it, what surprised you the most in the evolution of the show?

HARJO: It’s interesting, I think what surprised me the most is we had nothing to lose and we came in, we talked about our experiences from where we grew up and we just stuck to that. Like trying to stop this tornado, you know? Like, there are, like all of these things are things that are talked about in Indigenous communities and all we had to do was reflect our experiences in the story.

What really surprised me is that people responded to that so well, it kind of blows me away. It is so gratifying and also you know, you couldn’t ask for anything better just to take from all of the writers’ personal experiences and make a story and then people respond to it in that way.

DEADLINE: How does seep into the next season?

HARJO: Well, the reason I love the way Season 1 ends is I want Season 2 …I mean, the bar is raised so to speak by the end of the show, the finale. So I don’t want it to go back to Season 1. I want to take it from there and keep going and bringing people along for the ride. You know, like I want it to start there and keep moving in the way it’s been moving and ramping up as the season went.

DEADLINE: In the movement of Season 1, Daniel’s death a year before the season starts is a painful specter over Elora, Bear, Cheese and Willie Jack and also their fuel to hustle cash to get out of Oklahoma for the dream of California. When we learn in the Tazbah Rose Chavez written and directed penultimate “California Dreamin’” episode that Daniel’s death was a suicide, it tears off the scab. Suicide is a plague on many Ingenuous communities across North America, and the revelation goes on to inform everything in the finale, which you directed. Why did you want to go there like Reservation Dogs did?

HARJO: Like you said, suicide is something that really plagues Indian country and the numbers are really high and we’ve all been touched by it. I mean, everyone, from the actors to the crew, everyone has been touched by that. So, we wanted to tell Daniel’s story, the unfolding of what happened to their friend. I mean, I think that’s what Season 1 is.

No one talks about suicide in the show but you know it happened and you watch it unfold. I wanted to be really respectful in how that unfolded because there are so many people that are going to identify with that and there’s so many people that that’s touched their lives.

I mean, just on a personal note. There’s a lot of people, friends and friends of friends that I know that this has happened to.

So, we took really great care in letting that story sort of unfold and not pushing anything, trying not to be exploitative, and really just showing how it affects. And there’s a line where in Bill Burr’s episode where he says, you know, losing people like that, you know, friends like that, it’s like they’re here and then they’re gone and all the ripples in between, and it’s like to me that’s what this season’s about, it’s about the ripples that are left after something tragic like that happens to a friend. 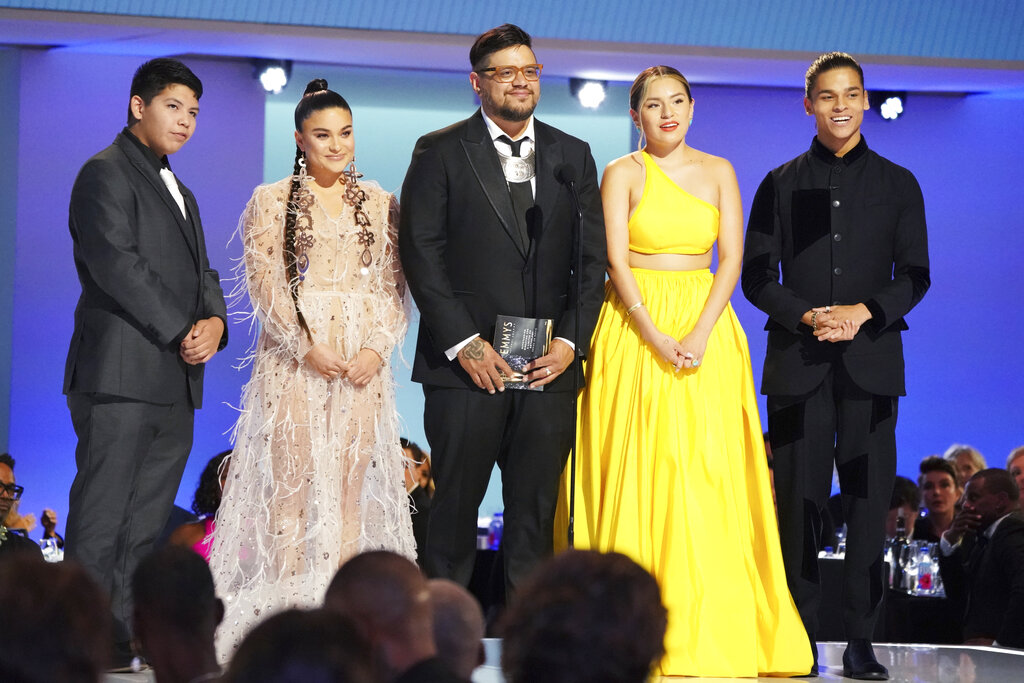 DEADLINE: You, D’Pharaoh, Devery, Lane and Paulina took the stage at the Emmys last night and put Hollywood on notice. What was that like after the season Reservation Dogs had?

HARJO: I was happy to be repping Indigenous people in a space that so rarely includes us.