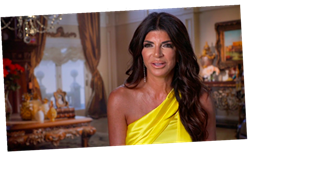 The Real Housewives of New Jersey fans will get to see Teresa Giudice’s new man, Luis “Louie” Ruelas, this season. In a new midseason trailer that Bravo dropped on Tuesday, Luis makes his debut on the show and it’s clear Teresa is taken with him.

Teresa started dating the businessman late last year after meeting him at the Jersey Shore. The couple is shown passionately kissing in the trailer as he tells her, “Thank you for coming into my life.” Meanwhile, Jackie Goldschneider and fellow cast members wonder why Teresa isn’t introducing him to them. But Teresa looks enamored with her new beau as she can’t help but smile big when one of her daughters notes that she appears to be in love with him.

Of course, not all of the other relationships on the show are going so well. Teresa’s brother, Joe Gorga, continues to have issues with his wife, Melissa Gorga.

“We’re growing apart,” she tells him at one point, to which he shoots back, “Maybe we are!”

During yet another intense conversation between the two, Joe declares they’re “done.”

“I’m not gonna give up what I want to do in life, you’re holding me back,” she tells him.

Joe replies, “Go be whatever it is you want to be. We’re done.”

The Real Housewives of New Jersey airs Wednesdays at 9 p.m. ET/PT on Bravo.