Dancing On Ice was tuned to the theme of Valentine’s Day with the remaining six couples performing as the characters from some of the most iconic love stories of all time. Contestants Faye Brookes, 33, and Hamish Gaman, 37, opted to take on Kate, the Duchess of Cambridge, 39, and her husband Prince William, 38, the Duke of Cambridge, in their wedding day outfits. While some thought the former Coronation Street star had a stark resemblance of the mother-of-three, other viewers of the ITV show were left very disappointed.

One viewer wrote on Twitter: “Why the f**k are Faye and Hamish dressed up as William and Kate #DancingOnIce.”

Another added: “I think the Royal family should be more appalled by #DancingOnIce than #TheCrown,” with a third posting: “Don’t recall Kate wearing a short wedding dress like that! #DancingOnIce.”

“Ok Faye and Hamish dressed as Kate and William skating to Marry You might be the most cheesy and cringe thing this show has ever done,” a fourth shared.

Whilst a fifth commented: “Did they really just put Kate and William in with a load of fictional characters? #dancingonice #doi.”

The couple ended up scoring a total of 32 points out of a possible 40 for the touring, which left Faye rather upset. 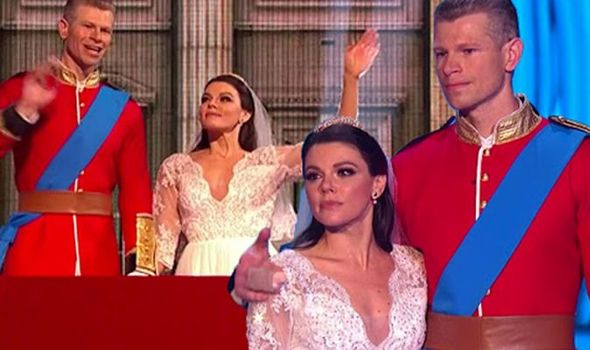 Judge Ashley Banjo, 32, asked the couple to “excite me” with more stunts as he wasn’t overly impressed with the performance.

He added: “You guys have so much potential but for me, it’s just not clicking yet.”

However, Christopher Dean, 62, argued: “The step sequence at the beginning was very intricate and I really liked it.

“You make it look easy which people translate into looking too simple.”

John Barrowman, 53, slammed the routine saying Faye “rushed” commenting: “I know you know this, you are a better skater than this.”