RuPaul’s Drag Race legend Miss Vanjie has become such a pop culture phenomenon that she’s now even being referenced during the BBC’s coverage of the Eurovision Song Contest 2018.

For the uninitiated, the tenth series of Drag Race kicked off in March with a moment that no viewer will ever be able to forget, all thanks to contestant Vanessa Vanjie Mateo. 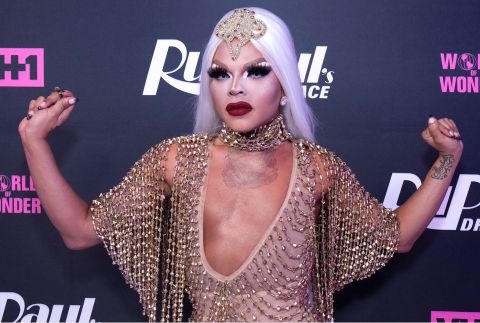 Vanessa only appeared in that one episode, having lost a Life Sync for Your Life battle to Kalorie Karbdashian Williams in one of the most controversial decisions in the show’s history.

Yet, Vanessa didn’t need to continue on in Drag Race to become an icon because her post-lip sync exit went viral. We could describe the moment for you, or you could just bask in the glory of Miss Vaaaaaaaanjie below:

It turns out that Rylan Clark-Neal is Drag Race super-fan, and in particular was just as captivated by Miss Vanjie as all the rest of us have been.

The This Morning contributor and Big Brother co-presenter been even been dropping “Miss Vaaaaaaanjies” into his social media videos for months:

But Rylan took his super-fandom even further during BBC Four’s live coverage of the Eurovision Song Contest’s two semi-finals throughout this week with repeated “Miss Vanjie” name-checks on-air.

Introducing Cypruss’s entrant Eleni Foureira on Tuesday (May 8), Rylan said: “Now Cyprus has never won, could she be the one to do it? I’ve gotta say, there’s a bit of the Miss Vanjie’s about her. She’s got presence. She’s got presence!”

Rylan followed it up by slipping in a cheeky “Vaaaaaaanjie”, much to the viewers’ delight:

One reference to the legend that is Miss Vanjie wasn’t enough, so you can probably guess what happened during Thursday night’s (May 10) second semi-final when Rylan was asked to introduced Montenegro’s entrant…Vanja.

He gave us a few “Vaaaaaaaaaaaaanja”, of course, and won over legions of viewers:

Where do we sign the petition to make Rylan an official co-host for the finals this weekend? We’d sign it with a “VAAAAAAAAAANJIE”, obvs!

Graham Norton will be anchoring BBC One’s broadcast of the Eurovision Song Contest 2018 starting at 8pm on Saturday (May 12), with Ken Bruce hosting the simultaneous Radio 2 coverage. (Vaaaaanjie!)