Saturday Night Takeaway host forced to apologise after guest swears ‘what the f***?’

Saturday Night Takeaway was back with an action-packed show this evening as Ant and Dec were up to their usual tricks once more. Tonight’s show saw Joanna Lumley guest star, but it was Stephen Mulhern who got the attention of viewers this evening after a guest on the live segment he hosted accidentally swore. 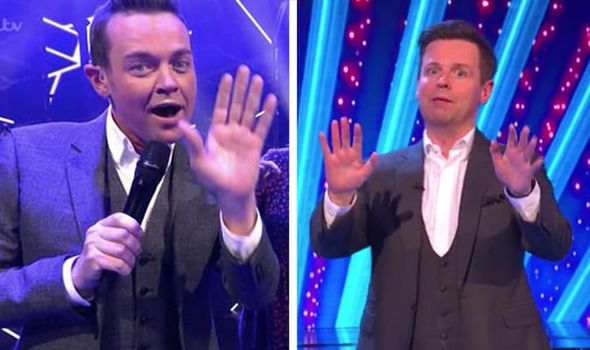 Stephen had a huge surprise in store for two fans of the show this evening after the signed up to become part of West End production of Magic Mike for the evening.

After the guests had spent time rehearsing, it was time for them to make their debut in the popular show this evening.

However, it was a huge surprise for the pair’s respective wives as one of them swore on air after Stephen caught up with them after the performance tonight.

Panning the camera onto one of the guests, one of them asked: “What the f*** is going on?”

Quickly realising what had happened, Stephen apologised to viewers, saying: “If that did go out, I apologise.”