Nearly 20 years ago, director Sharon Maguire introduced us to a clumsy, hapless if well-intentioned heroine in Bridget Jones (played by Renée Zellweger). It’s not a leap to imagine that, had she not had her diary to confide in, a young Bridget might have put pen to paper and written to a fairy godmother regarding her happily ever after.

Enter Eleanor, the lead of Maguire’s new film, Godmothered. “I wanted this to be a fairy godmother like no other Disney fairy godmother,” the director says. Instead of our beloved Bridget, Eleanor (Jillian Bell) journeys to our world to help a little girl sort out her boy troubles and other daily dramas — although due to a clerical error in fairy-tale land, the little girl is the fully grown and overworked single mom of two girls (Isla Fisher).

With Godmothered now streaming on Disney+, Maguire hopped on the phone with ET to chat about blowing things up on set, comparisons to Disney’s other real-world fairy-tale crossover, Enchanted, and whether she might direct a third Bridget Jones movie someday.

ET: What was it about Godmothered that drew you to it? And in a similar vein, what did you want to put out into the world with this film?

SHARON MAGUIRE: I think the appeal was it was very exciting being asked by Disney to make a movie, right? Because you know, it’s Disney. There are all these tropes of the Disney legacy — magic and wands and fairy godmothers and woodland creatures — and they’re all in this movie, but the exciting thing was that we also get to subvert that legacy for comedy. Eleanor is trained in magic but none of her spells go according to plan. And it was also exciting that happily ever after, that message, is delivered in a very different way than we’ve come to expect in previous Disney movies. So, it was having one’s cake and eating it, really. It was being able to work within that Disney legacy but also to try to subvert it a bit for comedy which was the most exciting thing for me. Also, I hadn’t done loads of magic. I’ve done comedy, obviously. I hadn’t done lots of magic and visual effects, and I was very excited about getting my hands on all of that.

Was there one sequence in particular that you read on the page and were most excited to get your hands on?

There was. It was the blowing up of the pumpkins in the field. I cannot tell you how exhilarating it was to rig a whole field with dynamite and pumpkins and then to watch it blow. It was very, very exciting. I really could not wait to get my hands on that one. If you can imagine the scene, poor Jillian, standing in that dress in a pumpkin patch in minus five degrees and we had one chance to do it, because we had no more pumpkins. We were filming in February and all the pumpkins were gone. These were the only ones left, so we had one chance to do it, three cameras on it, and boom. Calling action on it was exciting, and my god, it was so loud! It was just huge. It made me want to do a war movie. [Laughs]

That might be next in your queue of projects?

Yeah, can you imagine me with ammo now?

There are the inevitable comparisons people will make to Enchanted. Was that in the back of your head setting out to make this? Did you do anything to purposely distance yourself or set this film apart?

Well, because she comes from one world into the next, I think you’re going to have those comparisons and also Elf. In many ways, for me, that was one of the reasons why I was so excited to do it. There are three movies that we always watch at Christmas in our house and they are Elf, Enchanted and Groundhog Day. The script had resonances of all of those movies, and I thought, “How cool would it be to make one that has resonances of them all?” — our three favorite movies — and to hopefully make it its own original, possibly, classic. Whether we’ve achieved that or not, that was the ambition, to try to make one of those movies where you think, “Well, shall we watch Elf, Enchanted or shall we watch Godmothered this year?” That’s what I was hoping for. And what I look for in those movies is to subvert some tropes and to have a damn good laugh. So, I hope we get there with that. But we can’t escape the comparisons to Enchanted and Elf, but there’s room for them all.

I love that the hardest screening might be at your own home, to see if it passes the sniff test of becoming a new Christmas staple.

Absolutely. It’s going to be difficult, because we have all ages here: There’s a 93-year-old mom, there’s the mom and dad, there’s an 11-year-old kid. It’s tricky, and you’ve got to keep them all happy. It’s quite difficult making, allegedly, a Christmas movie. It’s a difficult one to get right. 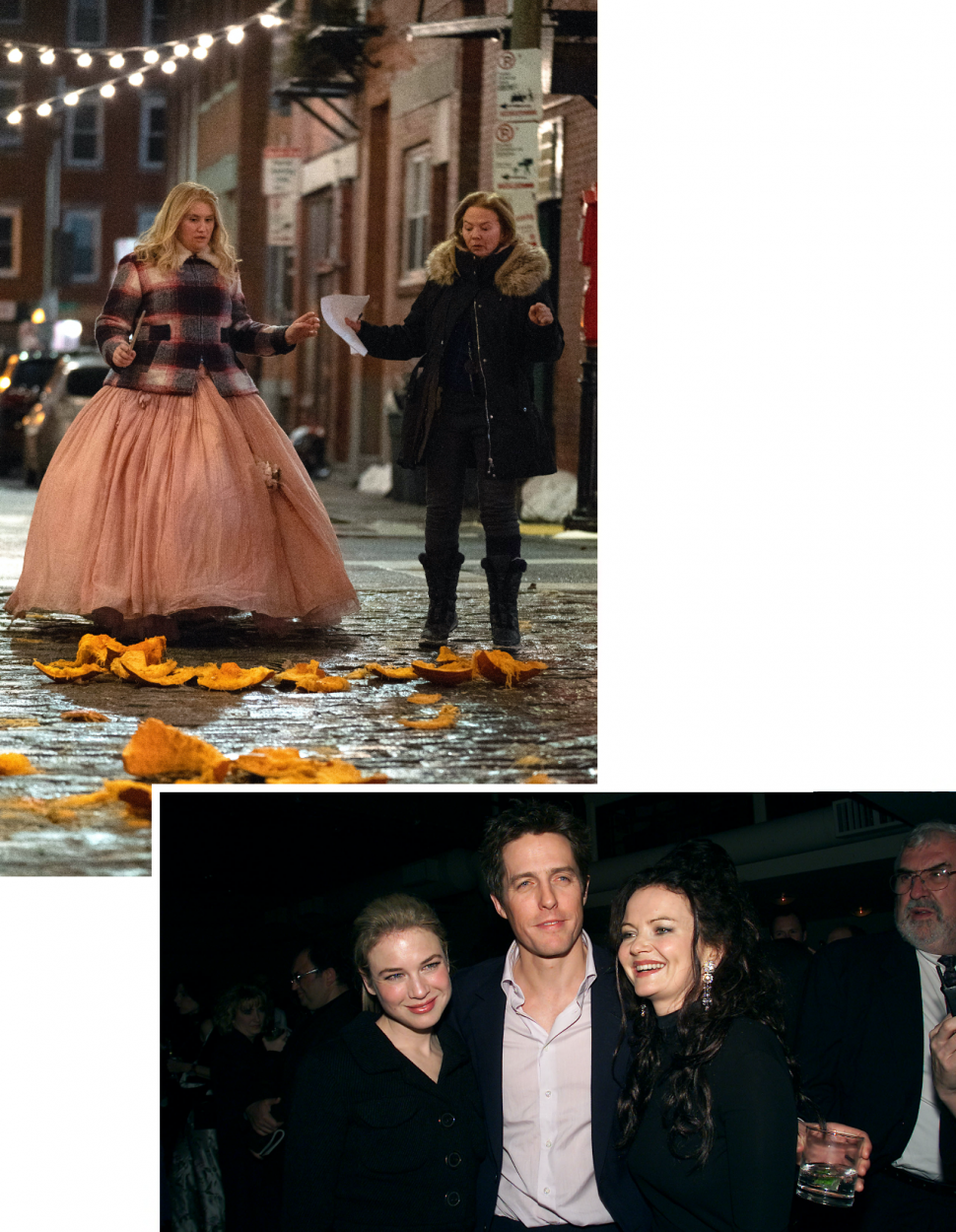 The film’s epilogue is very sweet. What went into deciding to do that in animation?

It was partly because we were shut down because of COVID, so we were shut down before we got to film that. There were only four days left that we didn’t film, so that’s why it became animation. But it was strange, there had been talks about it beforehand — even before COVID — about weaving in the idea that Eleanor always wanted to be part of a fairy-tale book. And it was decided that we wouldn’t do that, that we would film a little coda for real. But then once COVID happened, we decided we’d go back to the animation idea, and that was a huge ride for me. I’d never done animation before. You definitely feel the pressure of doing a piece of 2D animation for Disney. [Laughs] There’s nobody who can do 2D animation like Disney, so the pressure was on. But it was also very exciting to see that process that I’d never done before.

One of the fairy godmothers in training I read as a little boy getting to become a godmother, but I know others have read them as non-binary. Why was that little animated character important to include for you?

It went with the message of happily ever after, and it was very important for us to try and subvert that happily ever after. This is not a happily ever after that we’ve had before, and so everybody’s version of happily ever after is very different. The magic from real life comes from seeing everyday things in our lives that bring us joy and happiness, and that’s different for everybody. You know, it’s not a formula. It’s not dresses and princes and being this way or that way or being one way. It’s being who you are and what makes you happy. So, we felt it worked within the message of the movie. You see at the end of the movie, before the animated bit, everybody’s idea of happiness is very different to what Eleanor expected, and she has to teach her headmistress this. That was just part of it. And I love that little moment.

I will say, June Squibb as a fairy DJ and Jane Curtin as the headmistress of Motherland, that is my gay utopia.

I know! Mine too, right? [Laughs] I’ve wanted to work with those two legends my whole life. Imagine our excitement when they actually said yes. They’re both such true professionals, and they are just so funny in real life. It’s second nature to them. They come on and they do it. They are it. There’s no notes to give whatsoever. They are brilliant. I just love them both.

Before I hopped on the phone with you, I was watching an interview with Hugh Grant and he was talking about Bridget Jones. Do you still enjoy talking about those films or does it feel like something you’ve moved past now, 20 years on from Diary and five on from Baby?

Oh, I don’t know! They’re so representative of my life. So, I can’t move on from them even if I want to. And neither would I want to. But especially the first movie [Bridget Jones’s Diary], it’s on every single Christmas here. So, I think we need a new one. [Laughs] I’d like there to be a new Christmas movie that I made. That would be a super thrill. That would be great. And it’s the anniversary of the book — it’s the 25th anniversary — so there are several films and documentaries about it, and the films are being shown again this month here. I’m truly proud of them.

Hugh was talking about the movie because he got to play sort of smarmy there, but he’s gone on to have this sort of Hugh Grant renaissance playing the villain. Did you see him in The Undoing?

I did see him in The Undoing! I haven’t got to the end of it yet, so don’t tell me what happened. But did you see him in that amazing TV series [A Very English Scandal]? He played this MP called Jeremy Thorpe, and if you haven’t seen him in that, you’ve got to see him in that. He’s brilliant. It’s a serious role, but I mean, he can’t help but be funny. I loved him in that. It was a real, real character role, and he was just brilliant. I think he won an Emmy for it. But I haven’t seen the rest of The Undoing, but I’m excited to see Hugh in anything.

Have you had any talks about getting the gang back together for another Bridget Jones movie? At the end of Baby, you reveal that Hugh’s character is still alive, so is there more story to tell?

Yeah, and we haven’t had Bridget’s menopause yet, so there’s room for that. I believe there might be talk of it, but none of that’s been confirmed yet. I’m not in on the secret at the moment — I’ve just heard a few rumors that there might be plans for another — so I hope so.

Godmothered is now streaming on Disney+.