There is no stopping Evie Brush now! Sister Wives’ Maddie Brown-Brush showed off an adorable picture of little Evie on Instagram sporting her new leg.

The picture shows a toddling Evie walking with the help of her big brother, Axel. Evie has on some classic Van’s checkerboard slip-on shoes and appears to be very happy, with a sweet grin on her face.

Evie’s prosthetic is customized uniquely for her

The prosthetic looks to be a nice fit and it is customized with a cute surprise, a bright lemon print.

About the lemon print, Maddie commented, “The lemons seemed fitting.”

She even changed her Instagram profile to include the statement, “make lemonade,” in tribute to her daughter and the challenges that she has faced in her first year of life.

Fans come out in support of Evie

The support from fans over the new picture has been abundant. Hundreds of celebratory comments were made, with most fans throwing in emojis of lemons and affirmations that Maddie and her husband Caleb are awesome parents.

Many shared stories of their own limb differences, or experiences that they have had that have made them feel close to Maddie’s family even though they have not met.

Even grandma Janelle Brown chimed in saying, “This makes me the happiest.” 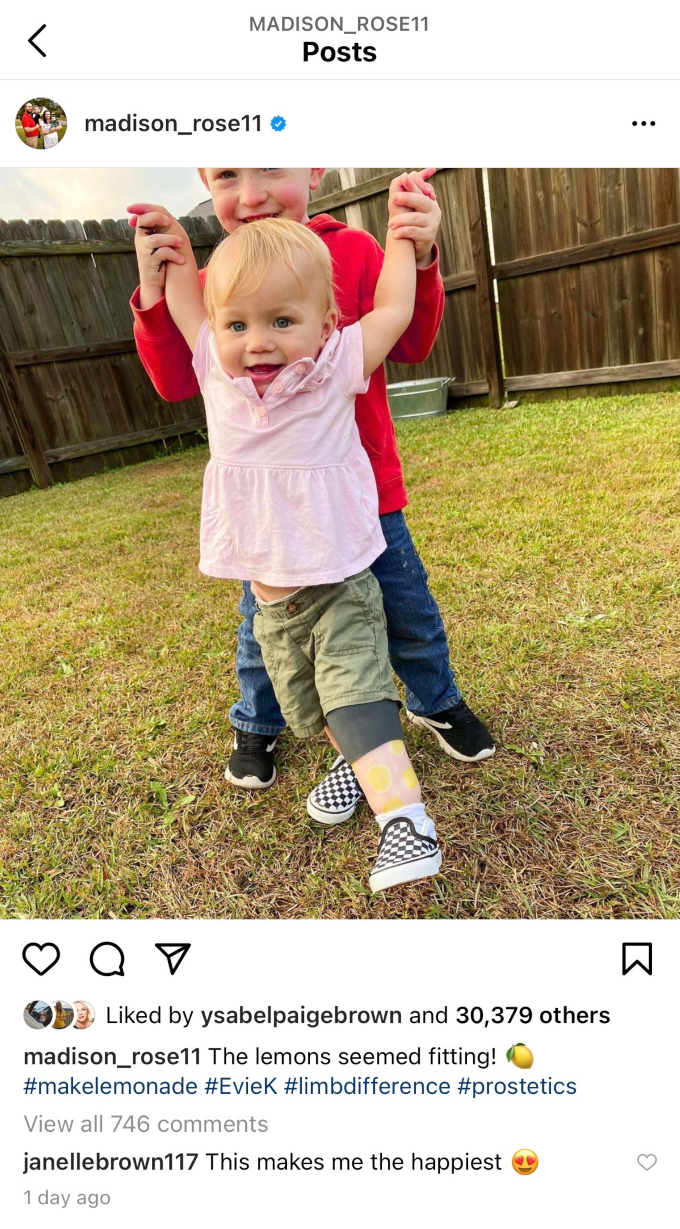 It’s been quite a challenging road for Maddie and Caleb since Evie was born. Evie was diagnosed with FATCO syndrome at birth, but even when Maddie was pregnant, early on they knew that there would be some limb difference for Evie.

FATCO syndrome is a rare genetic condition in which bones and extremities do not fully develop. Evie was missing her fibula, had a bowed tibia, was missing three fingers, and had a shortened forearm.

In August, just after Evie’s first birthday, she underwent a Boyd amputation. The distinctive surgery is relatively new. With the surgery, the foot was amputated at the ankle, but the heel pad was preserved so that Evie will have a more natural gait and engage more of her muscles than if the heel pad was removed. This will hopefully lead to a better mobility result for Evie as she grows and her body changes.

Maddie and Caleb came under scrutiny from many fans, but instead of hiding or going dark on social media, they opted to share the process.

Maddie stated, “As a family, we have decided to be open as we walk through this journey.  We want Evie to always feel pride in who she is, and all that God gave her.”

Based on these new photos, Evie is living her best toddler life.

Sister Wives is currently on hiatus at TLC.