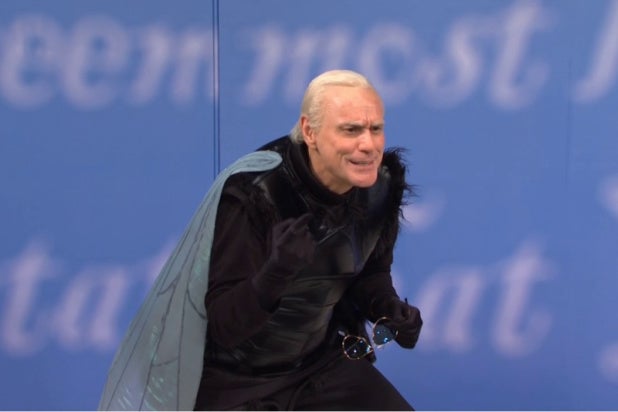 The second episode of the new “SNL” season started off much like the season premiere, with a cold open focused on current events, in this case the occasionally hilarious Vice Presidential debate on Wednesday. And of course Maya Rudolph once again showed up to play Democratic vice presidential nominee Kamala Harris opposite “SNL” cast member Beck Bennett as current Veep Mike Pence, Kate McKinnon as moderator Susan Page.

But while the debate was notable for a few things: Mike Pence’s constant interruptions and time hogging, Mike Pence’s weird eye,  and the faces Harris made during the debate as Pence interrupted her or hogged time, the main thing everyone talked about was  the Fly that landed on Pence’s hair late in the night.

So it was that while the “SNL” parody covered all of those other moments in some form or another, in the “SNL” version of the debate, it turns out that Jim Carrey’s Joe Biden was that fly, via a parody of the horror film “The Fly.”

At which point Carrey gradually changed his impression from a Joe Biden impression to an impression of Joe Biden slowly turning into Jeff Goldblum. And at the end, it was revealed that Herman Cain — who famously was killed by COVID-19, which he caught at Donald Trump’s divisive Tulsa rally in June — was reincarnated as a fly (played by Keenan Thompson here). Kristin Cavallari Reveals Where She Stands With Lauren Conrad Ahead Of ‘Laguna Beach’ Reunion
We and our partners use cookies on this site to improve our service, perform analytics, personalize advertising, measure advertising performance, and remember website preferences.Ok