The Voice UK star stripped off in the changing rooms and posed with his trophy shield after the charity match victory.

“It’s big, it’s round, it’s shiny and I’ve Finally got my hands on it #winners#captain,” he wrote.

Olly was among the stars playing in the annual game at Old Trafford this weekend, and after a 3-3 draw, England finally beat World XI on penalties.

Soccer Aid co-founder Robbie Williams once again returned as assistant manager of the England side, who won 7-6 on penalties, while Usain Bolt wore the captain’s armband for the Rest of the World.

Williams praised “the passion and commitment of all the players, coaching staff and teams across both World XI and England”.

“Being on the sidelines this year, managing the England boys and watching them put in a match winning performance, has really opened my eyes to the place this game now has in the UK public’s hearts. It makes people stand up and take notice. It changes children’s lives!” he added.” 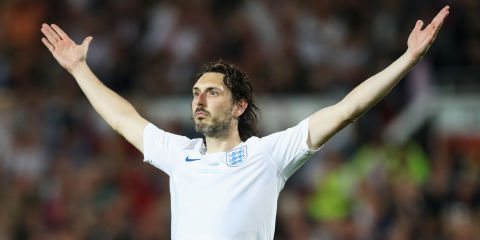 And Manchester United icon Eric Cantona returned to Old Trafford, taking to the pitch for part of the match.

Cantona also left Kirsty Gallagher pretty stunned during a live TV interview in which he (very casually) referenced one of the biggest controversies of his professional career.

To find out more about Soccer Aid, visit www.socceraid.org.uk/.