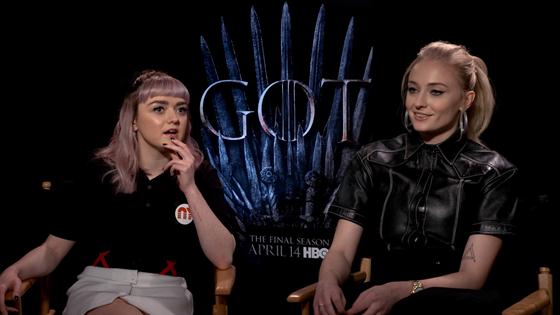 Miss the Sunday, April 21 episode of Game of Thrones because of Easter? Don’t worry, because Sophie Turner is here with a brief—and hilarious—summation of what you missed in “A Knight of the Seven Kingdoms.” Warning, spoilers ahead!

In a brief video on her Instagram, Turner, who is currently on vacation with fiancé Joe Jonas, succinctly says what happened with Maisie Williams‘ Arya Stark and Joe Dempsie‘s Gendry in the second episode of Game of Thrones‘ final season. Warning, the language is a little NSFW, and Turner completes her tea spilling with a sip of red wine. See the hilarious video below.

“In honor of Easter, I guess Game of Thrones wanted the storyline to have a little Easter bunny hop-hop-hopping into that p—y,” she said. “And that’s the tea.”

Yep, Arya, who is 18 in the show, had sex for the first time. Williams, 22, said she thought she was being pranked by co-creators and showrunners David Benioff and D.B. Weiss when she first got to the scene.

In a behind-the-scenes video, Benioff said they decided to have Arya explore sex for the first time because the episode was all about these characters having their last night together. “And everyone, I think, would face the end in different ways,” he said.