Sorry, Tyler Is Probably Not Down to Date Hannah After ‘The Bachelorette‘ Finale

Because she’s been there and done that, literally, former Bachelor contestant/tear fountain Ashley Iaconetti is recapping this season of The Bachelorette for Cosmopolitan. With insider insight as well as a clear eye for what’s going down both in front of and behind the cameras, read on for her thoughts.

This post contains spoilers for last night’s episode of The Bachelorette.

Based on Monday’s episode, it was clear Hannah’s connection with Jed was stronger than her relationship with Tyler. A couple of signs worth mentioning include Hannah getting annoyed at her family for criticizing Jed and the fact that their moments together were pretty heavy emotionally.

The perfect way to describe the difference between Hannah’s relationship with Jed and her relationship with Tyler is the movie Enchanted. Tyler is James Marsden’s character—the perfect-looking prince who says all the romantic lines and is everything she imagined herself ending up with. Jed is Patrick Dempsey’s character. He’s cynical, never imagined himself ending up with a true happy ending, and he challenges Hannah. And who did Amy Adams pick? It wasn’t James Marsden.

Watching Tyler get dumped was heartbreaking. One problem with this show is that a guy’s true character doesn’t show until he’s dumped, especially if it happens in the finale. Tyler left Hannah with so much class. He truly wishes her well and cares about her. It’s good to know men like Tyler actually exist in this world.

Watching Jed come out of the SUV to the engagement alter with a guitar made me cringe hard. Look, I get being able to be better with music than straight-up speeches, but cool it. He definitely thought everyone was going to swoon over the new Bachelorette engagement song. That didn’t happen. Especially since most people watching the proposal knew about his ex—and were watching with fully charged “liar goggles”—there was no way to even enjoy the moment as an isolated scene. That’s it? That’s our show? 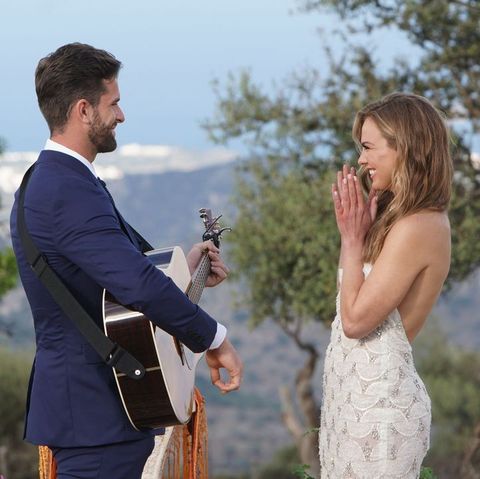 Not yet! Weeks later, Hannah explained how she found out about Jed’s girlfriend, Hayley Stevens. The day after their engagement, Jed told Hannah that he was dating someone before the show but broke things off the week before taping started. The People magazine story caught him in this lie and more. The scene in which Hannah and Jed sat down together after the article came out was, like, whoa.

Jed fucked up all over the place. Jed acted like this “ex” was a fling when they were obviously dating. He lied again about their breakup (if you can even call it that). He referred to being a “Nashville player.” Jed admitted to playing around with other girls at a pool post-engagement. *Takes breath* He claimed to only say “I love you” to Hayley while drunk, but when Hannah pushed, he ate his words and admitted he was just throwing “I love you” around like candy. I hated when Jed said that he didn’t want to cry on camera. This whole scene proved that Jed is not ready to be a married man, had no intention of being one any time soon, and he’s not someone Hannah can trust as a partner. Oh! I didn’t even mention the fact that he was telling friends that he “won” The Bachelorette. It’s a committed relationship, not a mirrorball trophy.

I do think that Jed and Hannah handled themselves with grace and maturity during their live show sitdown. I have a teeny, weeny bit of sympathy for him, because I truly think he kept these secrets from Hannah because he fell for her so hard and was terrified of losing her. It was definitely selfish, but I can still feel empathy, okay?! I understand keeping things from people because you want to keep the peace for as long as possible. Most people going on this show are shocked by the emotions they experience. He messed up so much, but it’s still sad to see someone self-sabotage into heartbreak. Hannah and Jed obviously have some sort of love for one another still, but like Hannah said, her feelings and care for him are no longer romantic. I loved when Hannah said this wasn’t a clapping matter.

They had to end the finale episode on a high note, especially since Hannah is such a beloved Bachelorette. Enter Tyler, who came out to cheers usually reserved for members of a boy band. He was a genuine sweetheart as usual, and Hannah was hitting on him hard. 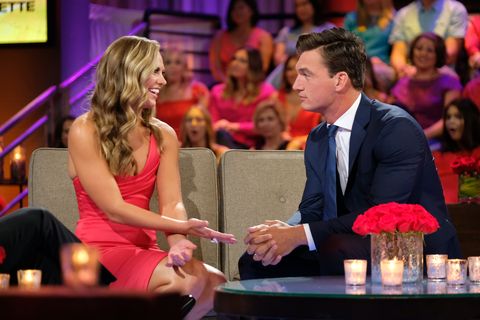 Yes, she asked him out, and I had a lot of feelings about this. First off, there was so much pressure for Tyler to say yes between Hannah, Chris Harrison, and the encouraging audience. He was totally cornered. His facial expression read as unsure. I mean, understandably so…Hannah did dump him about 10 weeks ago because she had more intense feelings for another man. This wasn’t like Jason Mesnick or Arie Lyendyk’s situations either. Those two men realized they truly loved their runners-up (for lack of a better word). Their fiancées weren’t the ones who screwed things up.

In this case, Hannah had deeper feelings for Jed, and Tyler’s more of a fall-back. How would you feel in this situation? I’m not saying it’s a bad idea for them to date and get to know each other better off camera, but I do think that he’s going to need time to think this through.

Imagine if you dumped America’s newest internet boyfriend?! Damn right, Hannah will be her boldest and go after him now. I wonder how this will all play out by early September when the new Bachelor is announced.