Star Trek: Discovery season 2 will answer how the show fits into the timeline, in a surprising way

Are you even really a proper fandom if you don’t vigorously debate your favourite show’s storytelling and continuity?

Star Trek: Discovery viewers have certainly engaged in energetic conversations about how the series fits into the classic Trek timeline, citing apparent discrepancies between what’s seen in the new show and The Original Series. 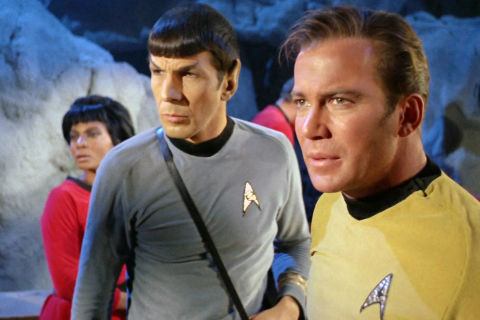 “We know we owe you a lot of answers about how this connects to canon, and you will get those answers this season,” he said. “You’re just not going to get them the way you expect them.”

Discovery‘s new episodes will have even stronger ties to classic Trek lore, with Anson Mount stepping in for the late Jeffrey Hunter as Captain Christopher Pike (Kirk’s predecessor who originally appeared in the unaired Star Trek pilot episode), while Rebecca Romijn will also take up the iconic role of Number One.

Spock will also appear in season two, though it’s yet to be revealed who’ll follow Leonard Nimoy and Zachary Quinto in portratying the beloved Vulcan.

The first season closed with the Discovery receiving a distress call from the USS Enterprise, with a trailer released at Comic-Con revealing that Pike assumes control of the ship to investigate a series of mysterious energy bursts in space.

“The signals are very significant, and form a lot of the investigative trail of why Enterprise is here,” Kurtzman hinted.

Star Trek: Discovery season 2 will arrive on CBS All Access in the US and Netflix in the UK next January.