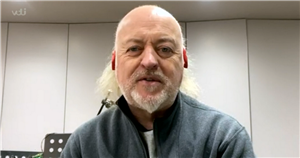 Reigning Strictly champion Bill Bailey appeared on Lorraine to talk about the show – but before they dived in, the pair discussed Bill's upcoming tour.

His comedy sketch, titled Bill Bailey En Route To Normal, is already a top hitter, but as he started talking about his new show which will launch next month, Lorraine questioned him on the title.

She asked if it was a nod in the direction of the pandemic, but Bill confessed he had thought up the name way before Covid-19 was a known thing.

Bill immediately claimed that he might have actually been a cause for the pandemic due to his title, adding: "It seems like I predicted it. Maybe it was me, maybe I caused it. Sorry everyone."

Lorraine quickly cut him off and said that he certainly didn't cause Covid-19 with the title of his show.

The comedian was certainly testing out a joke as he made the quip – though it's certainly not the decision to title his show En Route to Normal which contributed to the pandemic and ultimate lockdowns.

Bill appeared on the show to discuss his new show which launches on December 12.

Elsewhere, Bill discussed Strictly following his success on the show last year which saw him take home the Glitterball Trophy.

He told Lorraine that he's "blown away" by Rose Ayling-Ellis as the pair gushed over her growth from week to week.

Bill said that one thing the judges are looking for is improvement each week, adding that it's "what the show is about".

His appearance and praise of Rose comes shortly after he revealed some secrets about Strictly, confessing that you don't get to keep the Glitterball Trophy. He said on The Chris Moyles Show: "We win, and we get the big trophy and [cheers] and all the glitter and confetti is going off, and then the live broadcast finishes, and all the lights in the studio come up.

"And a bloke came up to me from the production and asked for the trophy back. Because you don't get to keep it, you just, you know, you can hold it, but you can't keep it."