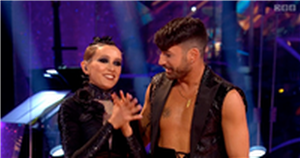 Giovanni Pernice has revealed the incredible blinking technique that helps his partner Rose Ayling-Ellis in routines.

Speaking on Sunday night's edition of Strictly Come Dancing, EastEnders star Rose, 27, who is the first deaf contestant to compete in the series, admitted that she had to "focus more" because of the "off-putting" faces the professional dancer makes during routines.

Giovanni, who recently responded to rumours he's dating MIC's Verity Bowditch, explained: "I have a lot of this blinking… and I'm counting all the way."

Giovanni, 31, was then encouraged by Rose and host Claudia Winkleman to reenact his blinking technique.

Immediately, the dancer started blinking rapidly, as he showed viewers the main way he communicates with Rose through their dances.

Rose and pro Giovanni particularly impressed everyone with their sensational Paso Doble.

The pair advanced to the next stage of the competition on Sunday evening, with Tilly Ramsay and Nikita Kuzmin given the axe.

Tilly and Nikita scored 30 points from the four judges on Saturday night while her proud father Gordon Ramsay, 55, was seen wiping away tears as he sat in the audience along with wife Tana Ramsay.

Speaking about their time on the show, Tilly said: "I'd just like to say a massive thank you to everyone who has made this an amazing, positive journey for me. From everyone here to backstage, wardrobe, makeup and camera crew. It's just been the most extraordinary time.

Meanwhile, earlier this weekend, Giovanni was forced to divert his attention from dancing as he took to Instagram to discuss the rumours of his possible new romance.

It had been reported that Giovanni was dating Made in Chelsea star Verity just weeks after his split from Maura Higgins.

A source said: "Giovanni has fallen head over heels for Verity. They are smitten. He's been training really hard but has made time for her."

Reportedly Verity and the Italian stallion have had several secret meet-ups. But this is news to Giovanni.

Taking to social media today, Giovanna posted on his Instagram Stories to give his input on the rumours.

"It's news to me that I am dating, didn't know anything about it."

Writing in pink font with a red shadow outline, Giovanni sprinkled some winking face emojis through the message, poking fun at the rumours.

He continued: "At the moment, as you know it's all about dance dance dance which is wonderfullll darling.

"That's the reality, no drama here Have a great day – the sun is shining? gio x."