Supergirl really should know by now that you just can’t trust a Luthor.

This week’s episode saw Kara (Melissa Benoist) discover the shocking truth that her good friend Sam (Odette Annable) is in fact Reign – the bioengineered weapon of Krypton that almost killed her earlier in the season.

But in an equally shocking surprise, she learnt that Lena Luthor (Katie McGrath) knew all along and kept it a secret.

Monday’s episode will focus on the aftermath of this reveal, with Kara confronting Lena about hiding this slightly crucial piece of information from her, and Benoist has hinted that the relationship between the two characters may never be the same again.

“This episode really starts to explore the Luthor and Super relationship and the complexities of that,” Benoist told Entertainment Weekly.

“Kara might not be very happy about the way Lena chooses to handle someone like Reign, who poses a huge threat to National City, so Kara’s hackles are raised, to say the least.” 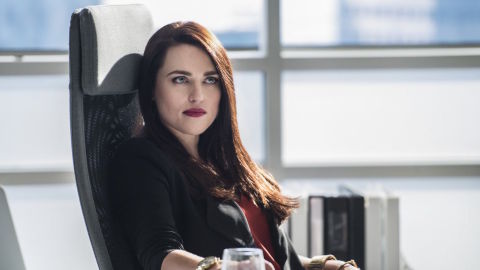 The two of them will try to find a solution to save Sam, but working together will prove be a tricky task as they reveal even more secrets to each other. Except for the biggest one, of course, that Kara is in fact Supergirl.

“We explore that a lot in the following episodes. Kara and Lena remain the same, but after the cards are out on the table, I don’t know if Supergirl and Lena will ever be the same,” said Benoist.

“And it’s interesting for Kara in that she listens to what Lena has to say about Supergirl, with Lena not knowing that she’s talking to her face. And that can be hurtful and uncomfortable and reveal a lot, so that’s not exactly what you want in a friendship.”

Supergirl airs on The CW in the US. The show airs on Sky One and Now TV in the UK.